On Thursday December 3rd 2020, the Official Spanish Chamber of Commerce in Belgium and Luxembourg organised a new virtual breakfast-debate within the framework of its “Business Circle” platform. The breakfast focused on “Towards a new agri-food model. The implications of the ‘From Farm to Fork’ strategy in the Spanish agri-food sector”. Ricard Ramón i Sumoy, Deputy Head of Unit of DG-Agri at European Commission, took part in the debate, which was moderated by Mazaly Aguilar, Vice-President of the European Parliament’s Committee on Agriculture and Rural Development. A discussion panel was then opened with Jose Carlos Caballero from Alianza Rural, Gabriel Trenzado, Director of European Union Affairs in Cooperativas Agroalimentarias de España and Juan Carlos Gallego, Farmer.

Pablo López Álvarez, Vice-President of the Chamber, made a brief introduction of the sector in our country and thanked all those present for their participation.

Mazaly Aguilar, Vice-President of the European Parliament’s Committee on Agriculture and Rural Development and moderator of the event, introduced the different speakers and highlighted the importance of the agri-food sector and the farmers for our country due to its economic weight and territorial importance.

Ricard Ramón i Sumoy, Deputy Head of Unit of the European Commission’s DG-Agri, began his speech by explaining how the European Commission has worked hard to maintain a strong Common Agricultural Policy (CAP) based on direct allowances for farmers, which also involves maintaining the continuity and viability of agricultural holdings without forgetting responsible soil management in the medium term. The rapporteur highlighted how the agricultural sector is the first to be affected by climate change and the environmental challenges of sustainability.

In the current framework of the Green Deal, which aims to lead and accelerate the transformations needed to address the current climate emergency, the Commission is working on the Farm to Fork Strategy to address all these challenges. 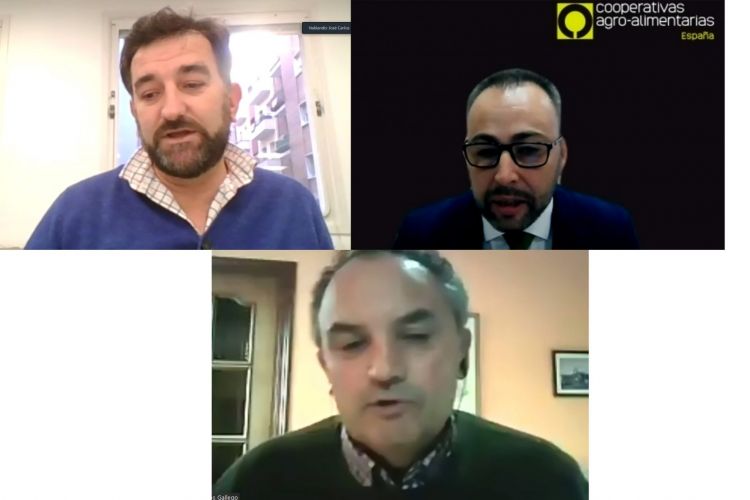 This strategy is based on establishing common efforts and objectives for the whole Union and involves various legislative changes such as reducing the use of pesticides and fertilisers, promoting the organic sector in line with the market or reducing the use of medicines without forgetting the fundamental European strategic priority of defending biodiversity.

At the international level, it is hoped that European agri-food standards will be expanded internationally and will be a fundamental axis in the assessment of relations with third countries. Finally, Ramón i Sumoy highlighted the enormous opportunity represented by the recovery funds to undertake the changes and investments necessary to accelerate the indispensable transformation in various areas of the sector.

After the first intervention, the various guests at the discussion table were able to react, highlighting various aspects such as the importance of fund all legislation in scientific facts, the disjunction in terms of yields between organic and traditional agriculture, the need to focus on solutions for the sector rather than mere prohibitions, the role that technology will play in the transformation or the difficulty in measuring and quantifying the impacts on the sector.

The discussion panel was then opened to debate on various issues such as the challenges and opportunities posed by environmental regulations, the need to understand and adapt to the consumer, generating the right environment to take advantage of opportunities, as well as the impact of the Green Deal on relations with third countries.

Throughout the event, the attendees were able to express their doubts, questions, and comments on numerous issues of interest. Thus, topics such as the impact of European regulation in third countries where local conditions were not taken into account, the compatibility of European environmental standards with WTO rules, the adaptation of the CAP to the different territories, as well as the challenges of the sector to have profitability and fair prices that allow its viability were addressed.

From the Official Spanish Chamber of Commerce in Belgium and Luxembourg we would like to thank all the speakers for their participation, as well as all those present for their attendance.

Webinar: “Towards new urban mobility: new alternatives to the automobile,...
This site uses cookies to provide you with a more responsive and personalized service. By using this site you agree to our use of cookies. Please read our cookie notice for more information on the cookies we use and how to delete or block them.Accept Read More
Scroll to top