On May 13th, the Official Spanish Chamber of Commerce in Belgium and Luxembourg hosted a webinar on “With the development of society through football”, in collaboration with its member company LaLiga.

The aim of this webinar was to present and explain the different social, educational and sportive projects of LaLiga, as well as the new initiatives they have been organizing during the COVID-19 crisis to support society and get closer to their fans all over the world. The webinar, which was taught in English, aimed to explain how through these projects the values of football are the vehicle to build a better world. 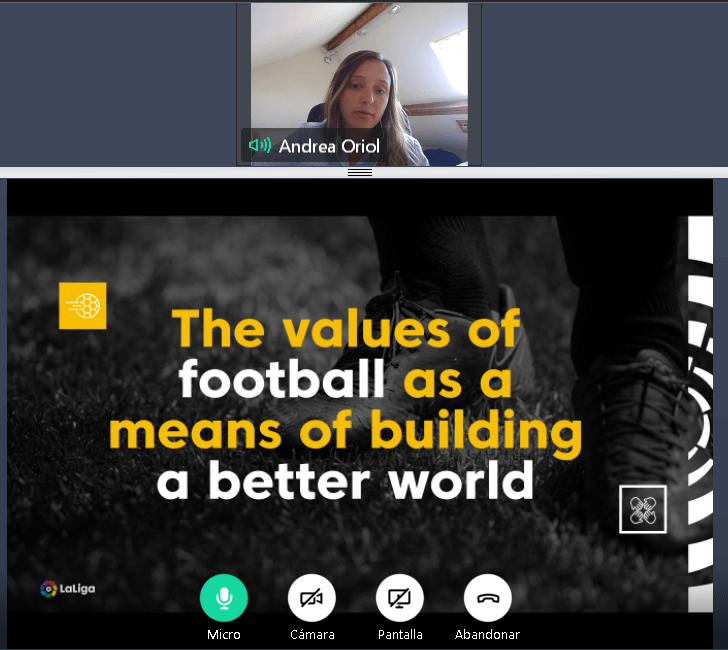 Andrea Oriol, LaLiga’s delegate in Benelux, started by informing about the important place these projects have in the company’s activity and explained that it is more than just about football and competition. “Giving back to society what society has given us” is the guiding theme of all these projects.

During the conference it was explained how due to the pandemic LaLiga has organized various activities under the subject of #LaLigaSeJuegaEnCasa. Among other examples, the association has organized its own initiatives such as “LaLiga Santander Festival” in which they managed to raise more than 1M € in donations from all over the world. At the same time, they have also participated in other initiatives run by other organisations such as the Red Cross in which they worked with their partner companies in China to donate medical supplies to Spain. 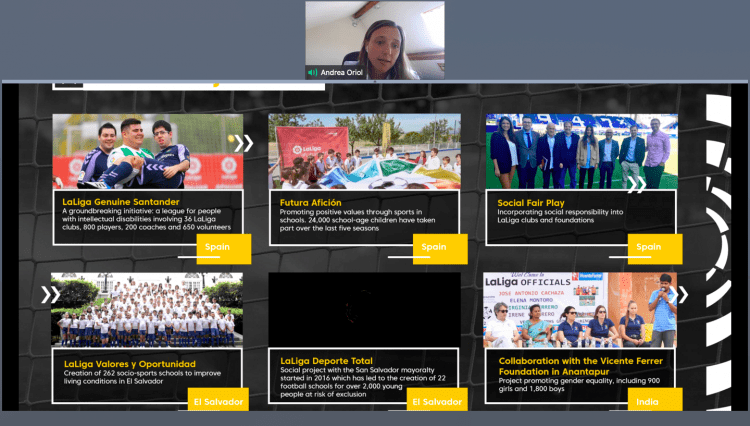 In addition, she reported the digital transformation of all LaLiga Foundation’s sports programs due to the pandemic but stressed the importance, more than ever, of keeping these programs active. Social and sports projects around the world have been maintained thanks to the social work of LaLiga. These projects are spread all over the globe, for example in India to promote gender equality, or in Brazil to promote youth telent’s visibility. They also have social projects developed through programs as well known as LaLiga Genuine Santander, Social Fair Play or LaLiga Valores y Oportunidad.

To conclude, the speaker presented the objectives achieved so far in figures as a general balance and highlighted the three future objectives in this social work: giving continuity and monitoring all its projects, continue to generate opportunities and empowerment among its participants and continue to expand horizons to new projects and countries.

At the end, a Q&A round was held in which the participants were able to raise their doubts about the information presented.

Covid-19 bonus for companies in Brussels
This site uses cookies to provide you with a more responsive and personalized service. By using this site you agree to our use of cookies. Please read our cookie notice for more information on the cookies we use and how to delete or block them.Accept Read More
Scroll to top