On November 16 and 17, the Official Spanish Chamber of Commerce in Belgium and Luxembourg held in Brussels the fourth edition of its training course “Public Affairs strategies and dialogue with the European institutions”, aimed at Spanish businesses and associations. 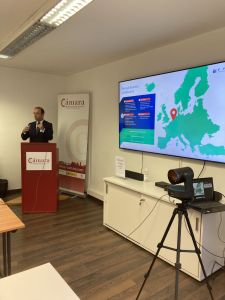 More than fifteen representatives of companies and national sectoral associations participated in the course, interested in learning first-hand the tools to establish an effective dialogue with the EU institutions, and motivated to anticipate both risks and opportunities from the political and legislative action taking place in Brussels.

The first journey started with an introduction from our president, Pablo López-Álvarez, Senior Managing director at FTI Consulting, who presented a global vision on lobbying and the monitoring of the EU agenda. Following, European Affairs consultant and former MEP Ignasi Guardans spoke about the institutional structure of the EU and its surrounding ecosystem.

Afterwards, the CEOE’s Permanent Delegate in Brussels, Isabel Yglesias, presented the basic tools to follow and contribute to the European legislative process, and David Luengo, Indra’s Head Office in the capital, the role of the Public Affairs Director.

“Good lobbying is not a matter of presence, but of quality,” underlined Yglesias.

In the afternoon, the attendees enjoyed a speech by Diego Canga, who gave practical advice on how to establish a good dialogue with the European institutions, especially with those of which he has been a member, such as the European Parliament, the Council of the EU, and the Commission, where he currently holds the position of Director in the Directorate-General for Agriculture and Rural Development.

The day was completed with the intervention of Sebastián Rodríguez, General Director of Rollout Democracy, who presented a manual for advocacy campaigns and European public affairs through case studies, and Raquel García, researcher at the Elcano Royal Institute office in Brussels, who spoke about the projects that this organisation develops from “the capital” and the role played by Think Tanks within the Brussels ecosystem of influence.

After the presentations of the day, the Chamber organised a networking dinner with Spanish professionals and European officials, in which the participants of the training and the members of our Board of Directors were invited.

On November 17th, the training started with a visit to the Permanent Representation of Spain to the EU, where Raúl Fuentes Milani, Deputy Permanent Representative Ambassador, received the Spanish companies and associations to introduce them to the role of the Council, the priorities of the Spanish presidency during the second semester of 2023, or the functioning of the REPER in Brussels.

Then, Juan Alfonso Herrero, Director of European Affairs at Mercadona, outlined the importance of the Transparency Register, a key tool for lobbying in Brussels, which has also contributed enormously to the professionalisation of the staff dedicated to Public Affairs. 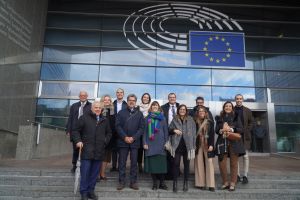 The day continued with a visit to the European Parliament and a lunch with MEPs, which was attended by Pablo Arias, José Manuel García Margallo and Javier Zarzalejos, members of the Group of the European People’s Party. During the meeting, the MEPs explained the work they do in the Parliament, as well as the importance of ensuring that the interests of European companies reach Brussels. The lunch was also an opportunity for those attending to present and resolve their doubts about the dialogue between the organisations and the MEPs.

Back in the Chamber, Ruth Estrada, Partner of Schuman Associates, explained the keys to access European recovery funds, and Susana Garayoa, Head of Communication and European Institutional Relations at Zabala Innovation, presented the funding opportunities for companies through programmes such as Horizon Europe.

To end the course, Sonia Vila, Head of Unit of “Management and Resources” of the Presidential Service I.D.E.A. – Inspire, Debate, Engage and Accelerate Action of the European Commission and former member of President Von der Leyen’s cabinet, addressed the EU’s sphere of competence.

The training was closed by Marta González, Secretary General of the Chamber, who took the opportunity to explain the services and the role played by the Official Spanish Chamber of Commerce in Belgium and Luxembourg as a support entity for Spanish companies interested in defending their interests in the European Union.

Conference «Supporting the Next IPCEI European Champions in Solar Industry...

Interview with Artur Sosna, Luxembourg Tourisme
Scroll to top
This site uses cookies to provide you with a more responsive and personalized service. By using this site you agree to our use of cookies. Please read our cookie notice for more information on the cookies we use and how to delete or block them.Accept Read More
Privacy & Cookies Policy