Last Tuesday 24th of January, the Official Spanish Chamber of Commerce in Belgium held a new luncheon-debate with John Berrigan, Director General for Financial Services, Financial Stability and Capital Markets Union, in the framework of its “Business Circle” tribune. The speaker talked about the priorities of DG FISMA for 2023.

The President of the Chamber, Pablo López-Álvarez, started the event with a brief introduction in which he highlighted the importance of the current year for Spain, as it will chair the Council of the European Union in the second half of the year.

Berrigan then began by stating that the world has changed a great deal since the beginning of the mandate, considering technological advances, the climate crisis, the COVID pandemic and the invasion of Ukraine. These circumstances have made sanctions one of DG FISMA’s main priorities for 2023.

In this regard, the director general stressed during his speech the need to focus on the implementation of sanctions, although he warned that it will be necessary to be careful. “We have to counter the narrative that sanctions negatively impact our economy,” Berrigan said. He also warned against overcompliance: “We don’t want sanctions to deny legitimate transactions”.

The Ukraine crisis has also highlighted the EU’s dependence on fossil fuels. 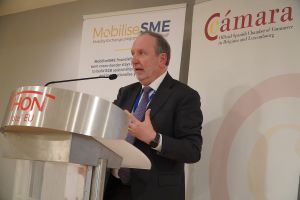 Berrigan recalled that the G7 and the EU agreed in December to put a cap on oil prices, a measure that, he said, “will mainly benefit third world countries”.

In addition to sanctions, Berrigan spoke during his speech of priorities such as sustainable finance and the regulation of the banking system to make it more stable. On capital markets, he spoke of the need to simplify access to markets for retail investors by rebuilding the investing ecosystem.

At the end of the presentation, there was a round of Q&A in which topics such as the regulation of crypto-assets or sustainable finance in the aviation sector were raised.

From the Chamber, we would like to express our special thanks to Bodegas Cornelio Dinastía, and to all the attendees for having contributed to the success of this luncheon-debate with John Berrigan.

The Chamber collaborates in the exhibition of Rita Martorell in Luxembourg

14/03 Conference “SMEs’ Collaboration and Employee Mobility in the European...
Scroll to top
This site uses cookies to provide you with a more responsive and personalized service. By using this site you agree to our use of cookies. Please read our cookie notice for more information on the cookies we use and how to delete or block them.Accept Read More
Privacy & Cookies Policy