On Tuesday 8 February, the Official Spanish Chamber of Commerce in Belgium and Luxembourg organised a luncheon-debate in Brussels with Marcos Alonso, Ambassador Permanent Representative of Spain to the European Union, sponsored by Indra. The theme of the event revolved around the European debate and its evolution until the Spanish presidency in 2023. The event brought together more than 70 participants, including members of the Chamber, business executives, delegates of Autonomous Communities and representatives of Spanish and European organisations.

The day was opened by Pablo López-Álvarez, President of the Chamber, who began his speech by expressing his enthusiasm to be able to resume the traditional luncheon-debates of our organisation and thanking all the attendees for their presence at the event. He then presented the extensive career of our guest speaker, Marcos Alonso, highlighting the excellent relations between the Chamber and the Permanent Representation of Spain to the EU. 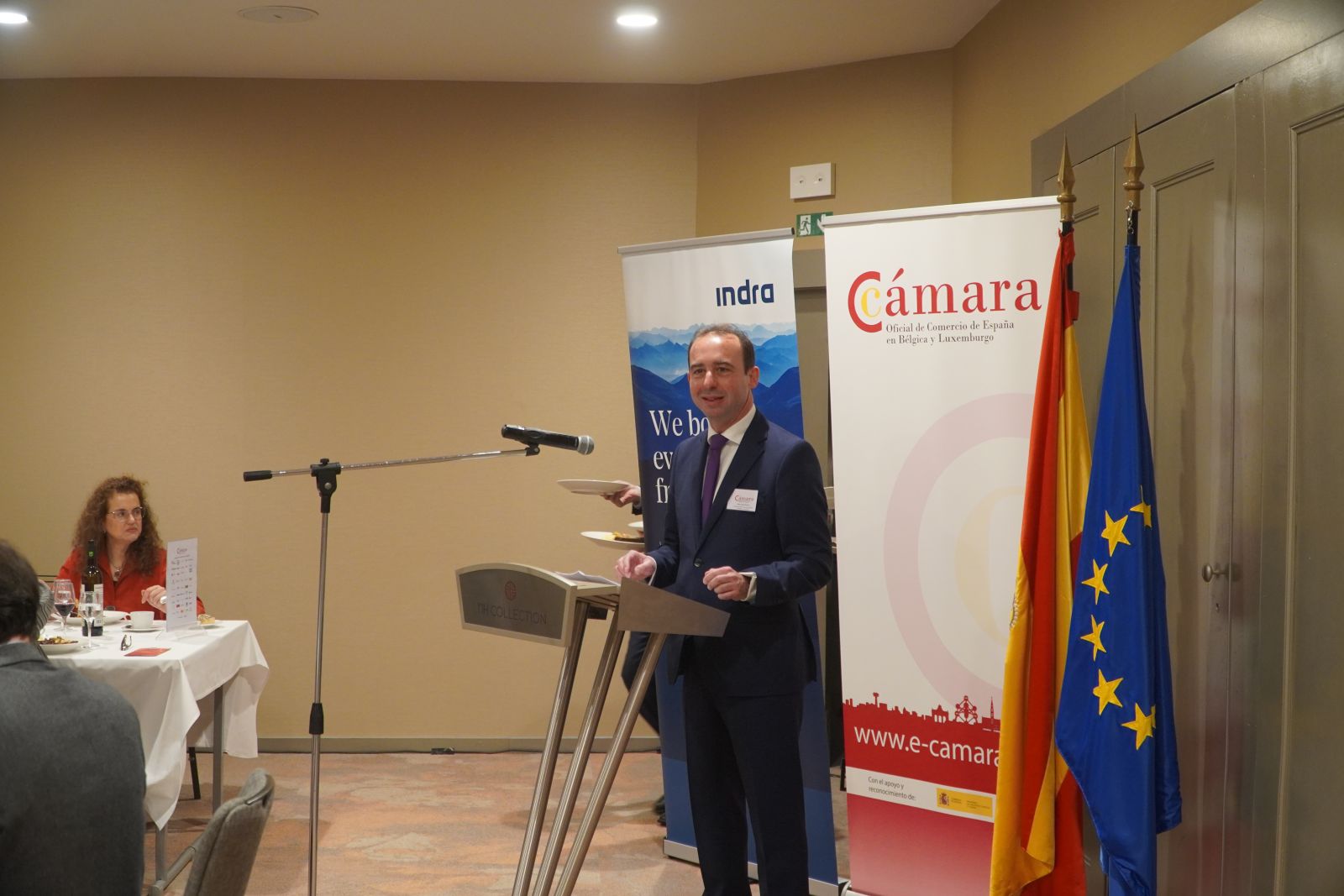 López-Álvarez also introduced David Luengo, Managing Director of Indra in Brussels, and sponsor of the event. Luengo presented his company, an international benchmark in consultancy and technology, and highlighted the current and future importance of technology in European policies, as well as the opportunity that the recovery funds represent for the transformation of Europe. He also emphasised Indra’s determination to lead European projects that provide greater recognition to the company’s products and foster its international expansion, and then gave the floor to Marcos Alonso.

Alonso began by explaining various key aspects of the current state of the debate on the European Union and the great opportunity that opens up for Spain with its presidency in 2023, to continue to lead the EU’s coordinated response to the different challenges that must be faced with its proposals.

Alonso stressed that the pandemic has not changed the priorities set by both the Commission and the Parliament for this policy cycle, but has even served as an impetus for accelerating them and for the commitment to a recovery that places value on the green and digitalised transition. 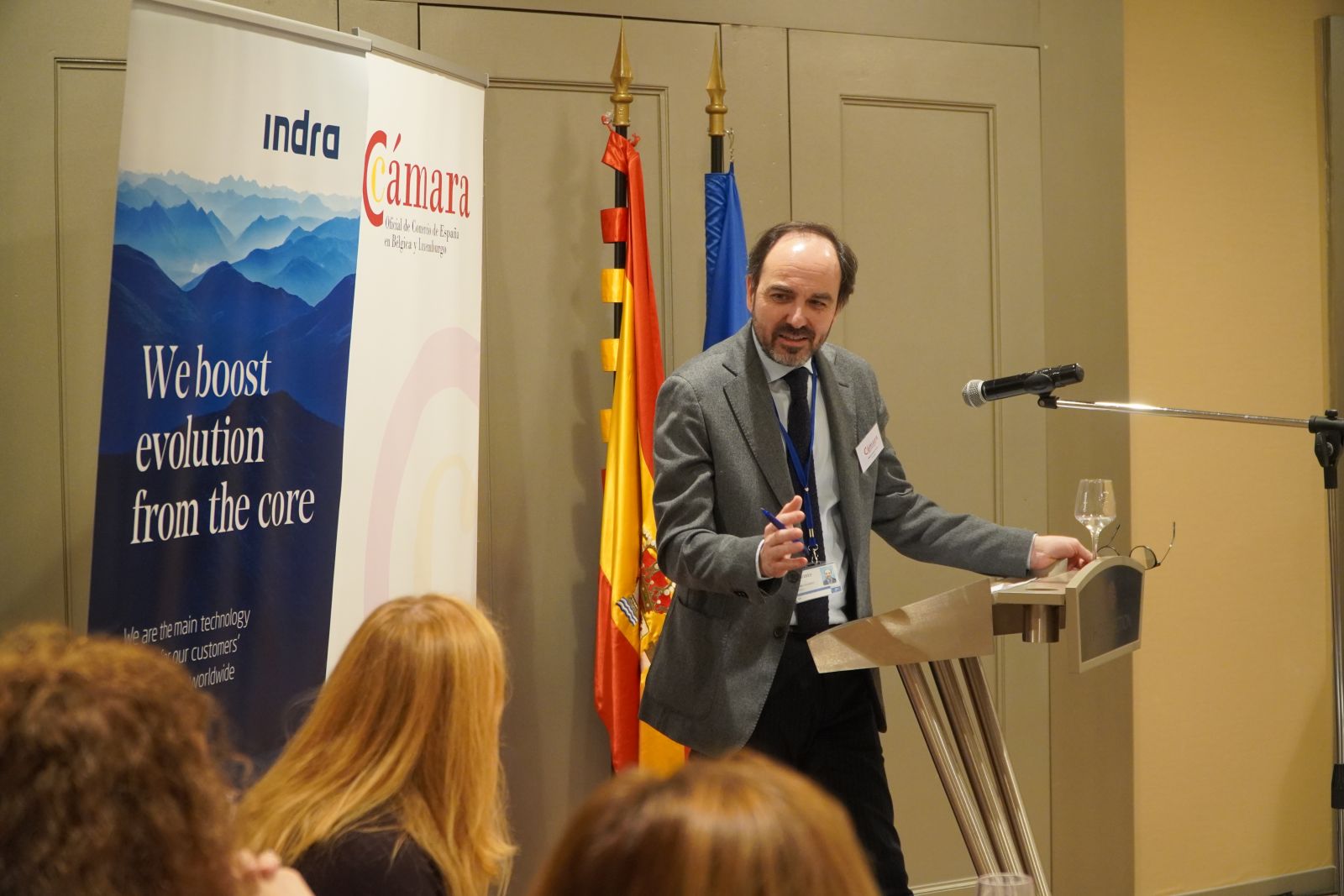 During his speech, Alonso devoted much of his time to explaining the lines of work that will undoubtedly have to be present when Spain is in charge of presiding over the EU Council. Among them, he highlighted the promotion of the Schengen area as a great achievement of all EU members, and the new framework of relations that must be built with the United Kingdom, given its position as a strategic partner of the Union and particularly for Spain.

In the strictly economic sphere, Alonso highlighted the commitment of the EU-27 to offer a coordinated response to the pandemic through the mutualisation of debt and the distribution of funds aimed at the economic transformation of the continent.

After the presentation, a round of questions was opened, where participants were able to make their opinions known and raise different questions about what had been presented. Among the doubts clarified at the event were various issues such as the position that Spain will take to promote EU relations with Latin America and the difficulties of coordination within the European Institutions.

The Chamber would like to express its special thanks to Bodegas Campoameno, whose Syrah Barrica and Chardonnay wines could be tasted by all the attendees, as well as to the participants, for making this event a very successful luncheon-debate.

The Chamber participates in the presentation of the FEDECOM Annual Award to...

10/02 Online Breakfast-Debate with Cristina Lobillo Borrero, Director of Energy...
Scroll to top
This site uses cookies to provide you with a more responsive and personalized service. By using this site you agree to our use of cookies. Please read our cookie notice for more information on the cookies we use and how to delete or block them.Accept Read More
Privacy & Cookies Policy