On October 15th 2021, the Official Spanish Chamber of Commerce in Belgium and Luxembourg organised a new virtual breakfast in the framework of its “Business Circle” platform. Carlos Romero Duplá, Counsellor for Digital Transformation at the Permanent Representation of Spain to the EU, participated in the debate.

The topic of the breakfast was “European digital policy: recent advances and future prospects”.

Pablo López Álvarez, President of the Chamber and moderator of the event, welcomed and briefly introduced the speaker and thanked him and all the attendees for their presence. 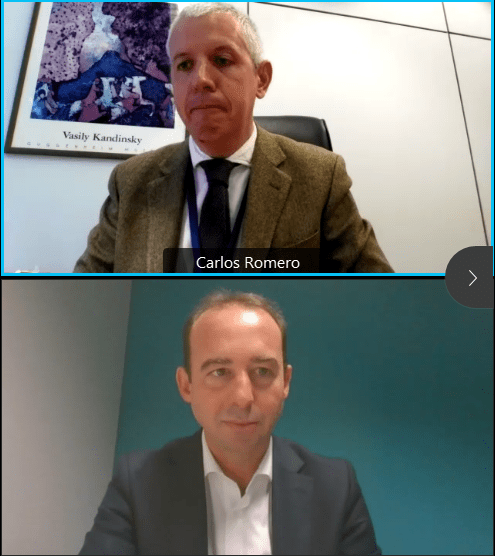 gan his speech by referring to the digital revolution and strategies that are currently being presented.

He began the discussion mentioning the importance of the renovation of networks and the analysis carried out by the European Commission. In that last point, he highlighted the shortage of components, basic manufacturers, geopolitics and cybersecurity, that block European economic growth.

Then, the speaker detailed the importance of the first regulation issued in Europe on artificial intelligence and data protection, which has been a benchmark for other countries.

Romero also added that Europe must be digitally sovereign in those areas in which it can be successful, refering the regulatory paradigms in artificial intelligence and the potential of the exploitation of the data that Europe produces.

In addition, he set out some of the most important pillars in the digital revolution such as the platform economy, artificial intelligence and the Data act. He pointed out the importance of regulating with a “leverage spirit” by generating a free movement ecosystem to drive industrial development, focusing on ethics as had been done before, but knowing how to easily put it into practice.

Carlos Romero also briefly mentioned the eagerly awaited Data Act initiative, which is due to be published in December this year. Which will try to solve problems in the data sector by avoiding oligopolies in data retention.

Finally, the Counsellor for Digital Transformation stressed that the pandemic has accelerated Europe’s digital adaptation. Consequently, with its new strategy, the Commission not only wants to legislate, but also to develop a review. To this end, it will produce an annual report with objectives, consequences, multi-country projects, etc. Among the countries supporting it, he named Germany, Italy, France and Spain.

Spanish companies are joining this digital revolution that the Commission wants to develop. Romero believes that electronic identification will allow a diversification on the portfolios of information, which  will give added value and recognition of digital rights, giving value to citizens.

During the question and answer time, attendees were able to express their doubts and comments on numerous issues of interest. Thus, topics such as the European health area- the initial position, current context and future prospects-, connectivity and the digitalization aspirations were discussed, a special mention was made to roaming as one of the great achievements for communication within Europe. Then, it was discussed the initiative to the transition to both 5G and 6G, the importance of being able to access data from different sectors, the digitisation of infrastructure, the transformation of the economy and the successful connectivity of Europe.

From the Official Spanish Chamber of Commerce in Belgium and Luxembourg we would like to thank Carlos Romero Duplá and all the attendees for their participation.

27th Networking Meeting of Erasmus for Young Entrepreneurs
Scroll to top
This site uses cookies to provide you with a more responsive and personalized service. By using this site you agree to our use of cookies. Please read our cookie notice for more information on the cookies we use and how to delete or block them.Accept Read More
Privacy & Cookies Policy