Past October 11th, the Embassy of Spain in Luxembourg celebrated the National Holiday. The reception, which took place in the Cercle Cité of Luxembourg, was sponsored by the Official Spanish Chamber of Commerce in Belgium and Luxembourg, Banca March, Santander Consumer Bank, Luxair, BBVA LuxInvest, PwC and Bankinter. The event was attended by the Prime Minister of Luxembourg, Xavier Bettel, among other local authorities, as well as entrepreneurs, Spanish representatives of the EU institutions and many members of the Chamber. 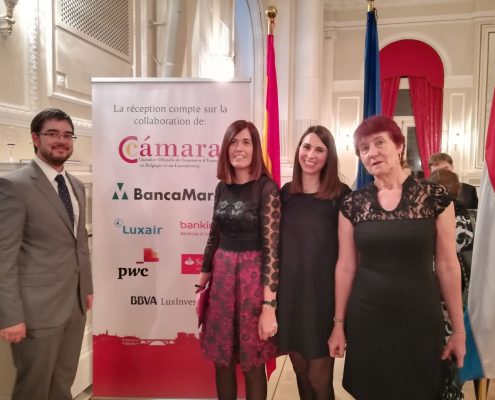 The Ambassador of Spain in Luxembourg, his Excellency Mr.Carlos María de Lojendio y Pardo Manuel de Villena, thanked the attendees their participation in the National Holiday, and the Chamber and sponsor companies in the organization of the act.

Juan Rodríguez-Villa Matons, President of the Chamber, attended the reception with other members of the Board of Directors.

The Embassy of Spain in Luxembourg and the Chamber, thank their collaboration to the partners:

The Embassy of Spain in Belgium celebrates the National Holiday

Industry leaders from the whole of Europe advocate in favor of the Mediterranean...
Scroll to top
This site uses cookies to provide you with a more responsive and personalized service. By using this site you agree to our use of cookies. Please read our cookie notice for more information on the cookies we use and how to delete or block them.Accept Read More
Privacy & Cookies Policy