Between 16 and 19 February, a delegation of the Walloon Region participated in an institutional journey to La Rioja, which aimed to establish local contacts and to identify business opportunities and collaboration between the two regions.

The Walloon delegation was presided by the General Director of AWEX (l’Agence wallonne à l’exportation et aux Investissements étrangers), Jean Pierre Marcelle, and consisted of the Economic and Commercial counselor of Wallonia in Spain, Frédéric Biava, responsible for public affairs at AWEX, Geoffrey Parks, as well as the General Director of roads and construction, Denis Cornet and the director of the agri-food cluster Wagralim, Isabelle Grommet. María Catalán, Secretary General of the Official Spanish Chamber in Belgium and Luxembourg, accompanied the delegation.

The program started on 16 February with a visit to Starglass, where the delegation was welcomed by its Financial Director, Jack Medina. The company, dedicated to the production of laminated as well as tempered glass for all types of vehicle applications, directly distributes to its clients in Belgium from its production center in La Rioja. During the meeting the delegation offered its collaboration to strengthen the commercial relations with the Walloon region.

The city of Logroño and the Walloon Region strengthen their institutional links throughout this year, especially their commercial links, based on the exchange of experiences in the ‘smart city’ and the TIC

The session of 17 February was led by the visit to the Town Hall of Logroño. Cuca Gamarra, mayor of the city Logroño, presided a meeting in which municipal and business leaders of the capital of Rioja participated. The visit was organized as a result of the established contacts during the third Meeting for internationalization of the City of Logroño and was realized by the City Council and the Chamber of Commerce of La Rioja last November in Brussels. Its agenda was coordinated by the Official Spanish Chamber of Commerce in Belgium and Luxembourg.

The leader of the Belgian delegation, Jean Pierre Marcelle, emphasized the importance of sharing experiences “and the continuation of partnerships”, especially, as the Walloon economic and commercial counselor Frédéric Biava emphasized, for themes concerning new technologies “of which we see interesting actions in Logroño”.

The president of the Chamber of Commerce of La Rioja, José María Ruiz-Alejos, indicated the importance of increasing the relations with Belgium, “a permeable country for our excellent products” and he advocated for strengthening links “to improve the commercial balance” between both zones, favorable right now for Belgium, “from whom we buy 60 million and to whom we sell 40 million”. Belgium is the sixth importer in La Rioja, whereas it is the ninth country to which the community exports.

The city council of Logroño presented the delegation the app Logroño.es and the website Red de Ciudades Inteligentes de España. Furthermore, a presentation about the remote management model of the municipal facilities was given focusing on the control and reduction of energy use and the projects for smart mobility and the pilot program about lighting in LIFE Green Tic were presented.

The representatives of the City council of Logroño started a presentation about the website Red Española de Ciudades Inteligentes; founded in our city in 2012 and the mayor of Logroño being vice-president and at this moment 65 associated municipalities. Afterwards the app Logroño.es was presented, which offers more than twenty services and was already downloaded 30.000 times.

This first part of the day closed with the presentation of the project “Digital Wallonia” in charge of Geoffrey Parks, through which more than 500 million euros will be allocated to the development of Smart Cities in the region the following years. The delegation presented its strategy to the representatives of La Rioja and proposed collaboration between both regions in the digital field.

Then, the members of the Belgian delegation attended various practical demonstrations of projects Logroño is developing. In particular the applications of the app of the water and irrigations Cycle ; energy Efficiency in sports facilities and urban and interurban mobility.

The day about getting acquainted with the various innovative initiatives Logroño is currently developing ended with the presentation of the pilot program about lighting in LIFE Green TIC. 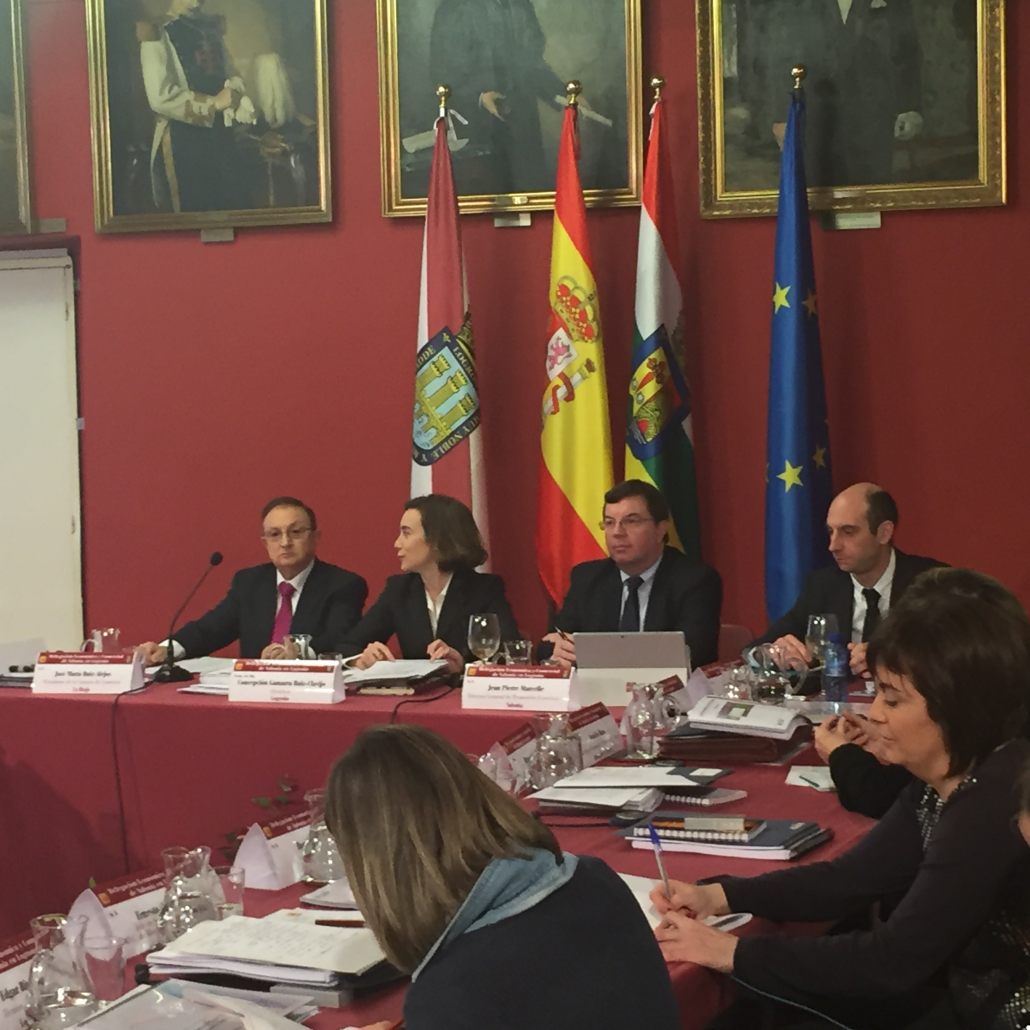 To end the visit, the mayor announced that, during the year 2016, a visit will be made that “will not be institutional but entrepreneurial” to Wallonia, “in order to work together for the establishment of important business relations and to generate opportunities for our companies who are the ones that developed the successful systems we presented to you”. “They have experience with success stories such as some of the ones already implemented in Logroño we were able to teach about today. It is interesting that they establish partnerships with other companies, in this case Wallonia, who is also working in this field”. Indeed, this collaborative model is the model the “smart cities” promote, “some cities that generate opportunities for companies”.

In the afternoon the delegation had a meeting with the Cluster AERTIC  (Agrupación Empresarial Innovadora del sector de las TIC de La Rioja), with the aim of exchanging experiences in the field of information and communications technology.

The secretary Javier Ridruejo and various companies of AERTIC interested in getting acquainted with the development of these technologies in this Belgian region and the possibility of establishing business partnerships participated in the meeting. 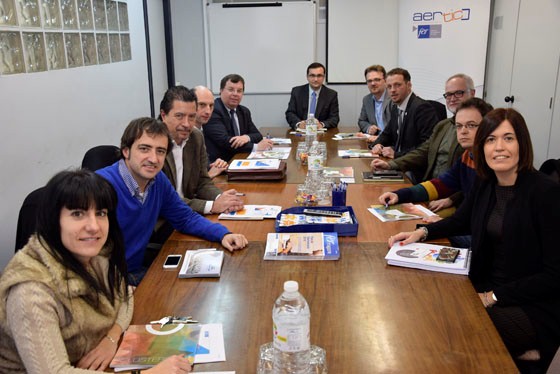 Under the wing of the Federación de Empresarios de La Rioja (FER), AERTIC channels the interests and necessities of a wide technological area related to the Information and Communications Technology in La Rioja.

The day ended with a visit to ADER (Economic Development Agency of La Rioja).

The manager of the Economic Development Agency, Javier Ureña, welcomed the delegation and informed them about the strengths La Rioja offers and about the fact that they convert these into a suitable location for receiving each type of business investment. 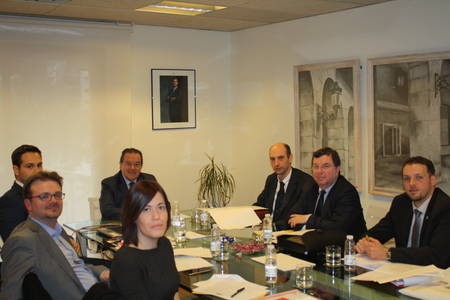 A business mission from La Rioja is expected to travel next October to the Belgian region Wallonia, with the wish to lead commercial exchanges and to look for mutual negotiation formula between companies of both areas

On 18 February, the delegation met with members of the Chamber of Commerce, Industry and Services of La Rioja, headed by its President, José María Ruiz-Alejos; “Since today we have started to build a solid collaboration bridge for business and trade between La Rioja and Belgium, primarily for the companies of both regions, of La Rioja and Wallonia, and we hope that it is already a lifelong bridge”, Ruiz-Alejos stressed.

He added that it is about “a bridge that has its pillars in the Chambers of Commerce of La Rioja and the Official Spanish Chamber of Commerce in Belgium and Luxembourg”, since these will be the institutions that will be the reference for the companies.

He also referred to the fact that other possibilities of collaboration between the companies of both countries could focus on the joint participation in European programs of possible mutual interest.

Marcelle remembered that this meeting was the second part of a gathering that started at the end of 2015 in Brussels and that it will continue in the future because “La Rioja and Wallonia are two very similar regions”, that can collaborate in many aspects.

Afterwards, a meeting with Cluster Food+i took place. The installations of the Centro Tecnológico Empresarial Alimentario CTIC-CITA en Alesón (La Rioja), partner of Cluster FOOD+i, were the setting of this meeting between entities from La Rioja and Wallonia, who share the objective of fostering the competitiveness of the agribusiness industry of the respective regions by means of innovation. 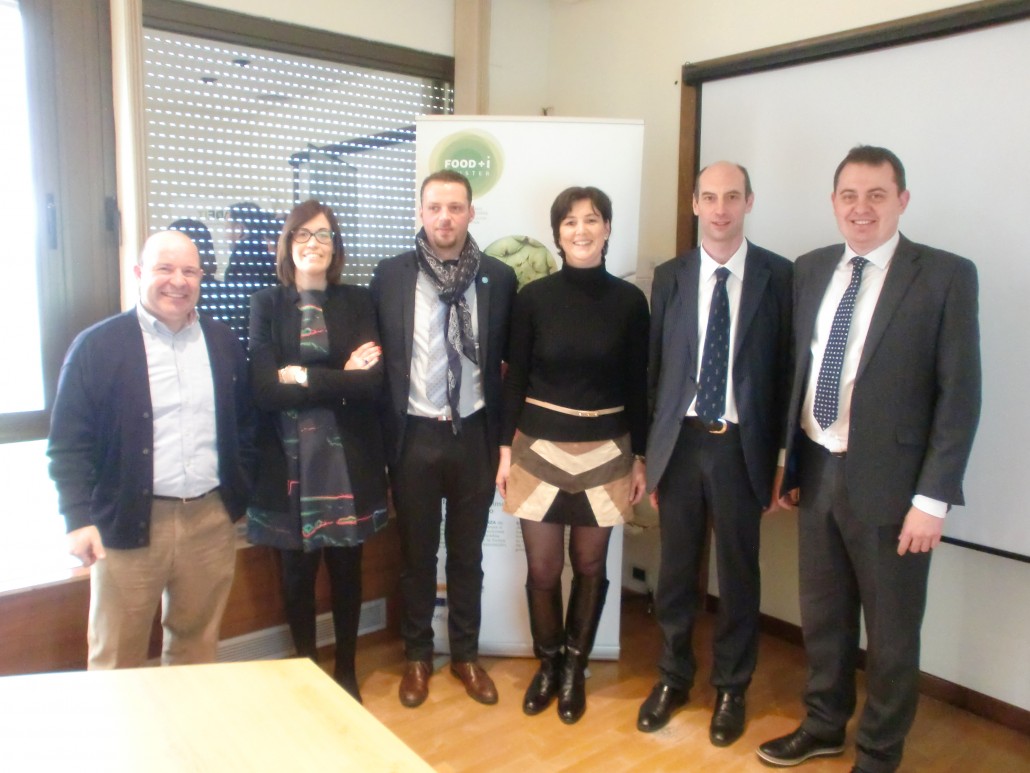 Thus, during the meeting they could give a short presentation of the sector, in addition to dealing with issues such as innovation policy or participation in common European projects. They analyzed the main lines of research of both clusters with the aim of establishing the bases for future collaborations.

The final meeting was held with representatives of the company Constantia Flexibles.

With a production plant in Belgium, the company, originally from La Rioja, is leader in its sector with more than 3.000 clients and nearly 10.000 employees around the world.

Extension of the collaboration agreement with IBERIA – New On Business...

Business meeting of FEDECOM and the Spanish Chamber of Commerce
Scroll to top
This site uses cookies to provide you with a more responsive and personalized service. By using this site you agree to our use of cookies. Please read our cookie notice for more information on the cookies we use and how to delete or block them.Accept Read More
Privacy & Cookies Policy