Last 27 th of September, the Official Spanish Chamber of Commerce in Belgium and Luxembourg organized, in collaboration with its member BLAW & TAX, a conference about the “Spanish Taxes for Individuals Living Abroad”. The event gathered members of the Chamber, officials of the European institutions and representatives of Spanish companies in the Grand Duchy,

The Vice President of the Chamber, José Luis Rodríguez Álvarez, welcomed the participants and introduced the speaker. 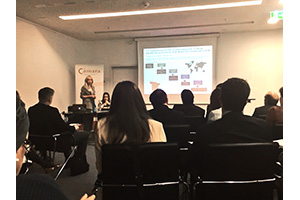 The conference was run by Inmaculada Pineda, partner of BLAW & TAX, a firm specialized in international taxation and legal-tax consulting at national and international scope related to corporate aspects.

The conference focused on two main points: fiscal residency and its implications, regarding the taxation and fiscal benefits provided by the Spanish domestic legislation.

First, the speaker presented the alternative rules that determine that the tax residency is located in Spain. The right identification of the fiscal residency is fundamental when determining the tax obligations of the natural persons.

Thus, the Spanish regulation incorporates the criteria of residence, location of economic interests and the presumption of tax residency in case the spouse or the children are tax residents in Spain.

Inmaculada Pineda made a parenthesis to explain carefully the well-known model 720 which establishes the informative obligations on the assets located in the Spanish territory. 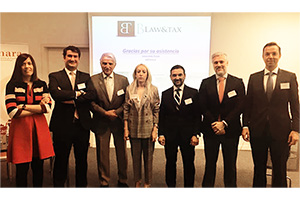 Then, Inmaculada Pineda referred to the situation of tax havens and the rule of “tax quarantine”, according to which the person continues to pay taxes in Spain during the transfer year and the following four years.

Afterwards, the conference focused on the OECD Conventions and, especially, on those established with the aim of avoiding double taxation. These conventions are of great importance because they have primacy over the Spanish domestic regulations.

In addition, particular cases were addressed on the maintenance and the change of residence and its related obligations.

The conference attracted great interest from the participants, who were able to raise their questions at all times to the rapporteur.

From the Camera, we appreciate the collaboration of BLAW & TAX in the organization of the conference.

The Chamber accompanies ONCE and Ilunion in signing the loan with the EIB
This site uses cookies to provide you with a more responsive and personalized service. By using this site you agree to our use of cookies. Please read our cookie notice for more information on the cookies we use and how to delete or block them.Accept Read More
Scroll to top