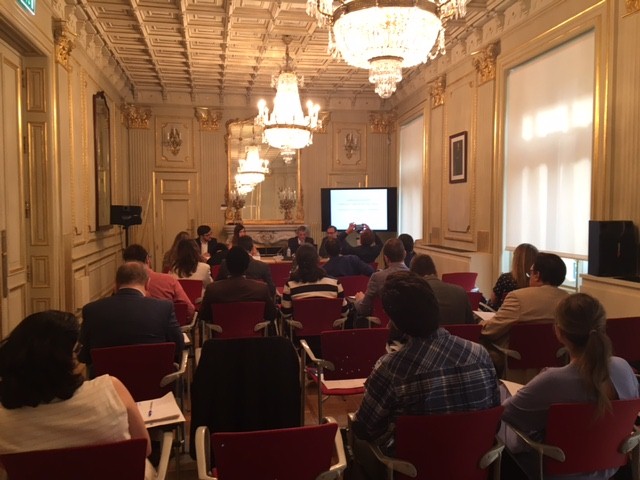 Last June 20th, the Official Spanish Chamber of Commerce in Belgium and Luxembourg, represented by it Secretary-General María Catalán, participated in a conference organized by Brussels Invest & Export and the Chamber of Commerce of Madrid on ““Brussels: gateway for the European Western market”. The conference took place in the Chamber of Madrid’s headquarters and had the presence of more than twenty Spanish companies.

After a welcoming introduction by a representative of the Chamber of Madrid, Ariane Léonard, economic and commercial counselor of the region of Brussels-Capital, introduced the reasons why Brussels is considered as a city for stablishing foreign companies and investment projects.

Rafael Álvarez Campa, associate lawyer at WBCJ, informed the attendees about tax incentives in Brussels for FDI and innovative entrepreneurship. Bert Dehandschutter, associate lawyer at Racine, summarized the legal aspects that every company should know before stablishing a business in Belgium.

María Catalán, Secretary-General of the Official Spanish Chamber of Commerce in Belgium and Luxembourg, numbered some recommendations for the companies which were present in the conference and their future establishment in Brussels. She also explained the services offered by the Chamber to recently established companies in Brussels.

To conclude, Ángel Rebollo, Director of Atrevia Brussels Office, talked about his experience as representative of a Spanish company settled in Belgium and beneficiary of Brussels Invest & Export’s Welcome Package.

Once the presentations were finished, the attendees had the opportunity of clarifying all their doubts during a networking breakfast-

Belgium is currently one of the most open and dynamic economies in the world, with an estimated GDP growth of the 1.7% for 2017, according to the IMF. The geographic location of the country, in the center of Europe, along with its infrastructure in transportation, logistics and communications, allows a very fast access to European providers and markets. Belgium is one of the main foreign-investment recipients.

At the same time, the Belgian Government is applying new tax measures that are very attractive for r+d and software development. The political relecante of Brussels as the EU Capital and many international bodies broadens opportunities for foreign companies. Furthermore, Brussels property market is one of the most competitive in Western Europe.

II Golf Tournament of the Spanish Community at Luxembourg