On March 23rd, the Official Spanish Chamber of Commerce in Belgium and Luxembourg organised a webinar on “Pension & inheritance: 2 problems, 1 solution!” in collaboration with its member company Pareto. The conference was held by Gauthier Remaekers, Senior financial planner at Pareto.

Although inheritance & succession law are very complex and turn even more complicated when moving in transnational contexts, the reality is that the only way to protect familiar or personal wealth when facing retirement or inheritance is to draft a plan paying attention to different aspects. In this planification, the state pension after retirement should only cover around 30% 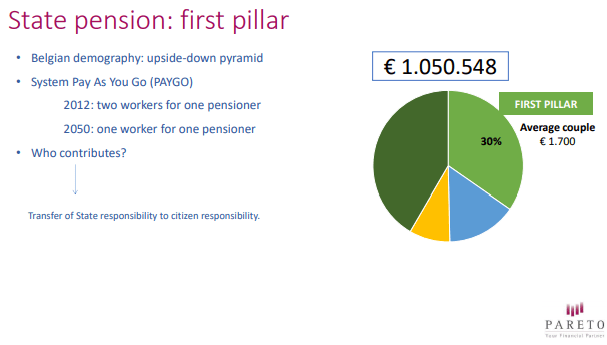 on the annual income after retirement and corresponds to the “first pillar” of the plan. The pension systems differ importantly between countries and has to be taken into account, for example, in Belgium there is “pay as you go” system. The different pillars corresponding to savings and/or pensions fund are also critical in the planification and taxation has to be always kept in mind under Belgian law as taxes are higher than in other countries.

Taxation is nevertheless present in all phases of any wealth planning activity and, of course, especially in inheritance matters. The taxes paid in the revenues, indirect taxes are followed by an inheritance taxation that varies between countries and even regions within countries, for example in Belgium. Therefore, planification of wealth for inheritance is critical to smartly minimize the impact of this taxations. The order of inheritance and the number of legal heirs were also featured in the webinar to explain the different schemes or formulas that an inheritance can take in real life. For this retirement planning, the figure of an adviser can make the difference and all experts agree on the fact that the plan should be built in an inverted pyramid scheme featuring the different components of wealth (savings, real state, etc.) according to the foreseen economical needs.

Participants were able to ask questions to the speaker during the Q&A session. Thus, topics such as retirement in cross-countries context and regional taxes disparities were discussed.

From the Official Spanish Chamber of Commerce we thank Pareto and Gauthier Remaekers for their excellent presentation as well as to all attendees for their present.

Online Breakfast-Debate with Álvaro de Elera, Member of the Cabinet of Věra...

The Federal Government and the Governments of the Federated Entities discussed...
Scroll to top
This site uses cookies to provide you with a more responsive and personalized service. By using this site you agree to our use of cookies. Please read our cookie notice for more information on the cookies we use and how to delete or block them.Accept Read More
Privacy & Cookies Policy