On June 25th, the Official Spanish Chamber of Commerce in Belgium and Luxembourg hosted a new session of its Breakfast Debate, a platform aimed for bridging Spanish companies and European Institutions. The event featured Lucía Caudet Balzer, Deputy head of cabinet of Thierry Breton, EU Commissioner for Internal Market, under the title “COVID-19 recovery: what future for our digital sector, our industry and our internal market”. Given the exceptional circumstances due to the spread of COVID-19 in Belgium and the social distancing measure in place, this breakfast debate was held online and was attended by representatives of member companies of the Chamber, managers of companies, multinationals and Spanish Regional Delegations.

Pablo López Álvarez, Vice-President of the Chamber and moderator of the event, welcomed and thanked the speaker as well as all the attendees. First he introduced the speaker’s career and gave a quick introduction to the current situation we are facing that without doubt is affecting the p 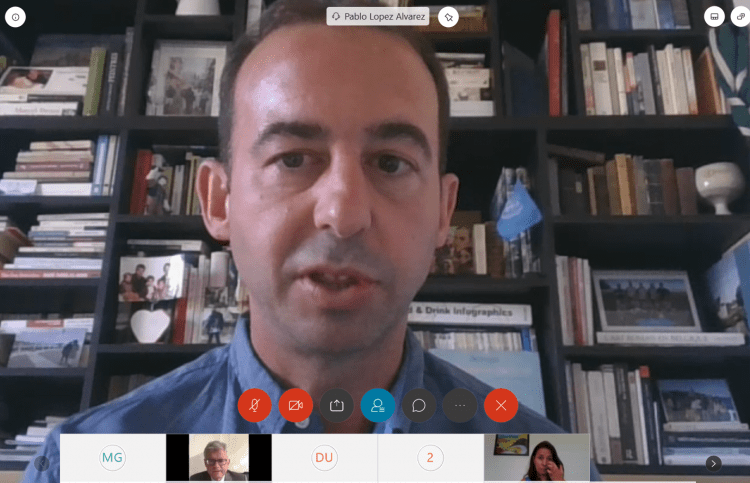 riorities and activity of the European Commission.

Then, on behalf of our member company and sponsor of the event Telefónica, its General Secretary Pablo de Carvajal took the floor and thanked the speaker and the entire team of Commissioner Breton for their enormous dedication in the fight against the pandemic, as well as their dedication for an early economic recovery. He also did a brief summary of the situation in the telecommunications sector, which has demonstrated its reliability and highlighted its importance in our society, and aimed that it will be necessary to apply new measures to improve the European digital ecosystem.

Lucia Caudet began by summarizing the activities and objectives that the commissioner had been carrying out during his first 100 days marked by the Green Deal. After the emergence of the coronavirus, the agenda changed all of a sudden to focus during a first phase in boosting the production of masks and blowholes by contacting the industrial manufacturers to give these products to those who needed it most. After this first phase of emergency management, the commissioner’s activity is currently focused on the new European industrial strategy. To explain this new strategy, the speakerr began by referring to the different industrial ecosystems, highlighting that this is not a problem that affects a single member State, but involves the entire single market itself. To carry out this strategy, it will be necessary to provide liquidity and repair these industrial ecosystems by doing a microeconomic analysis of them.

The speaker reported that the European Commission has presented a historic recovery plan where the member States and the industrial sector will play a major role generating the necessary synergies that will transform our economy and industry through fair conditions within Europe but also in relation to the United States and China to maintain the competitiveness of our companies.

To conclude, Caudet explained that an agenda has been made to improve the resilience of our economies in order to 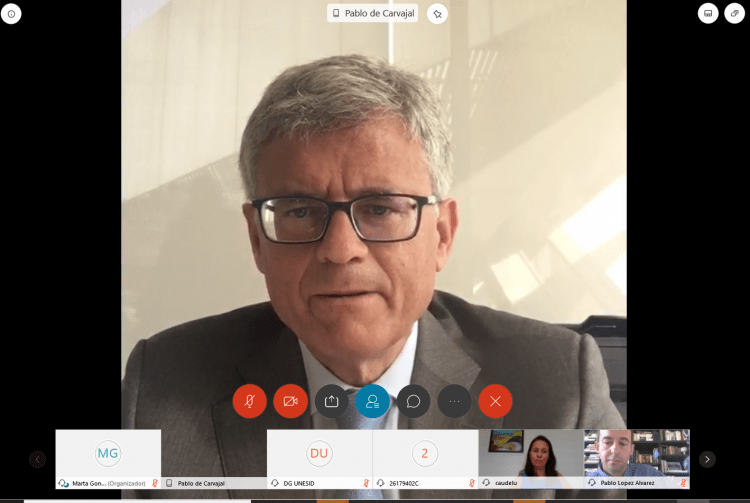 ensure the interests and decision-making autonomy of Europeans by avoiding a great dependence on third States as the current sanitary crisis has staged. Then speaker then stand out that this crisis may represent, beyond the terrible human cost, an opportunity to modernize our economies for example with a better connectivity throughout Europe in which technologies such as 5G, block chain or artificial intelligence will be fundamental. It was also highlighted that despite the critics that have been received, this strategy is not based on planning the economy and does not pursue protectionist ends. Finally the speaker explained that despite of Europe arrived late to the first technological wave based on personal data, the European institutions won´t let pass this second wave based on industrial data.

During the Q&A session, participants were able to raise many questions of interest to the speaker. Thus, various topics were discussed such as the strategies to support the various ecosystems of the European economy through new technologies and the promotion of value chains, the different aspects that are being addressed in the standardization of technological components, the trends of the European Defense Fund or the leadership of European projects ourtside of internal borders.

The Spanish Chamber of Commerce in Belgium and Luxembourg would like to thank Lucía Caudet Balzer, all the participants in this session and our member Telefónica for sponsoring this event.

09/09 Virtual round table on «Successful collaboration between Spain and Belgium...
This site uses cookies to provide you with a more responsive and personalized service. By using this site you agree to our use of cookies. Please read our cookie notice for more information on the cookies we use and how to delete or block them.Accept Read More
Scroll to top