On June 24th, the Official Spanish Chamber of Commerce in Belgium and Luxembourg hosted its General Assembly Meeting. Due to the spread of COVID-19 in Belgium and in order to follow the social distancing measures, the Assembly had to be celebrated in an online format.

The President of the Chamber, D. Juan Rodríguez-Villa Matons, took the floor firstly to thank the present members its attendance and he apologized for any eventual technical problem because of the format that may have.

He also wanted to wish to all the members and its families the best against this pandemic. The President also mentioned the main news regarding the staff with the appointment of Marta Gonzalez Benguria as Secretary General after María Catalan left the post and the enrollment of Javier Rincón Cruz as Business Development Manager. The President wanted to thank María Catalan for its outstanding dedication to the Chamber for many years. The recognition was also extended to Miguel Ángel Arrimadas that leaves the Treasurer post. After this he gave the floor to the Secretary General of the Chamber.

Marta Gonzalez Benguria explained the agenda of the Assembly and afterwards summarized the main activities and events organized by the Chamber during 2019. She also made a brief resume of the current situation that the Chamber is facing due to the impact by the COVID-19 and the lockdown measures taken. The Secretary General highlighted the rising tendency in the number of members in the last years that has been consolidated in 2019. The diversification in the Chamber’s activities during the last year was also highlighted with a special mention to the new services available for members in Luxembourg. At the end of its speech the Secretary General presented the beginning of the management of PICE international mobility program from the Spanish Chamber and supported by the European Social Fund.

Based on the statutes and as a recognition for all the years of dedication, the Secretary General and the President proposed to the Assembly to validate María Catalan and Miguel Ángel Arrimadas as Honor members, being validated by the Assembly by acclamation.

Due to the absence of the Treasurer in the Assembly and as the documents were sent to the members the income and expense accounts, the income statement and the balance sheet for the 2019 financial year were set as presented and approved by acclamation. 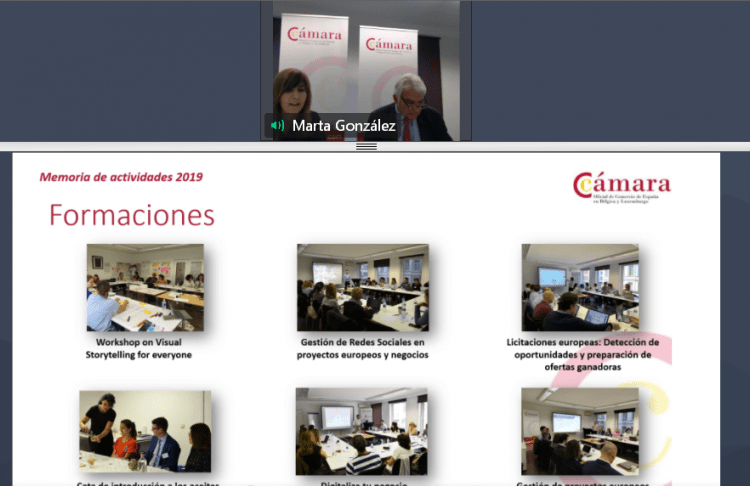 Additionally, the appointment of Abelardo García González (BBVA) was ratified by the Assembly.

The President of the Chamber thanked the Secretary General and its team for its work as well as to the young stagiaires for their vitality and commitment with the Chamber. Last but not least, he wished to best of luck to all the presents in this difficult time due to the current health crisis.

Virtual Breakfast-Debate with Lucía Caudet Balzer, Deputy head of cabinet of...
Scroll to top
This site uses cookies to provide you with a more responsive and personalized service. By using this site you agree to our use of cookies. Please read our cookie notice for more information on the cookies we use and how to delete or block them.Accept Read More
Privacy & Cookies Policy