On June 26, the Official Spanish Chamber of Commerce in Belgium and Luxembourg organized, in collaboration with its member Schuman Associates, a conference on “The future priorities and budgets of the EU: Do they benefit Spain?“. The event was attended by several members of the Chamber and representatives of Spanish public institutions in Brussels.

The conference was given by Ruth Estrada, partner of Schuman Associates, a consultancy based in Brussels with more than 25 years of experience in financing and European Public Affairs. 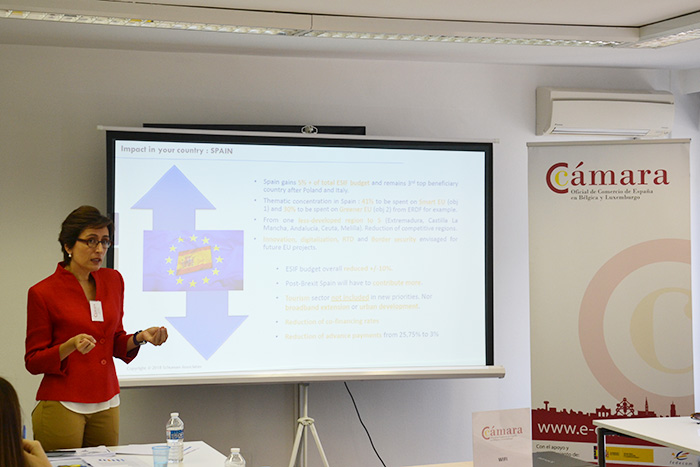 As can be seen from the title of the conference, the exhibition focused on the new multi-year financial perspectives of the EU, which are prepared every seven years. This budget proposal is the first that is made without the participation of the United Kingdom.

These new budgets present several changes compared to the previous ones. In fact, the number of programs has fallen from fifty-eight to thirty-seven, multiplying the investment in digitalization, Erasmus program and security and defense programs, as well as borders contol.

In relation to these initiatives, one of the main novelties exposed by Ruth Estrada is that these budgets look for a centralization of the financing by increasing the control of Brussels.

As a consequence of this centralization, the European cohesion policy will also be seriously impacted, reducing funding for these policies by 10%, which will be compensated through centralized policies.

Estrada also explained the budget distribution foreseen for the new Horizon Europe (which will continue the work begun by Horizon 2020). This horizon plans to allocate more than ninety four trillion euros to programs grouped in various pillars, such as: the research and development of infrastructures, global challenges and industrial competitiveness and the strengthening of the European research area through the creation of a European Council of Innovation. 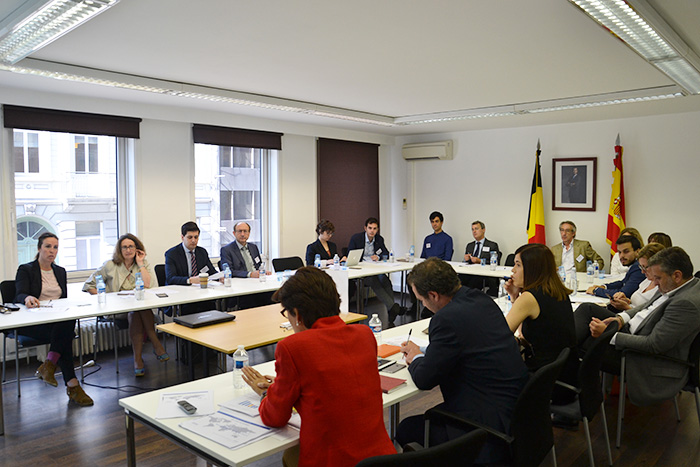 Likewise, the co-financing of Brussels in European projects will be significantly reduced, which will affect investment in regional policies, mainly affecting southern and eastern European countries.
Therefore, the five objectives through which investments in structural funds are conducted will be the search for a more digital, greener, better connected, more social and closer to citizens Europe.

As the speaker emphasized, sectors such as tourism and urban development are left out of the main core of these budgets. It is for this reason that Spain, although benefiting in many aspects, will try to introduce these matters in the possible modifications that may be carried out in the proposal. The final decision is scheduled to be approved in May 2019.

After the intervention of Ruth Estrada, numerous attendees had the opportunity to ask questions or comment on the draft budget of the European Union.

To conclude, the speaker informed on the reports published by Schuman Associates in relation to the multiannual financial framework 2014-2020, suggesting its reading for all those interested in European funding and the novelties that are proposed for the coming years:

Breakfast-Conference New companies and associations Code – What impact on...

General Assembly Meeting 2018
This site uses cookies to provide you with a more responsive and personalized service. By using this site you agree to our use of cookies. Please read our cookie notice for more information on the cookies we use and how to delete or block them.Accept Read More
Scroll to top