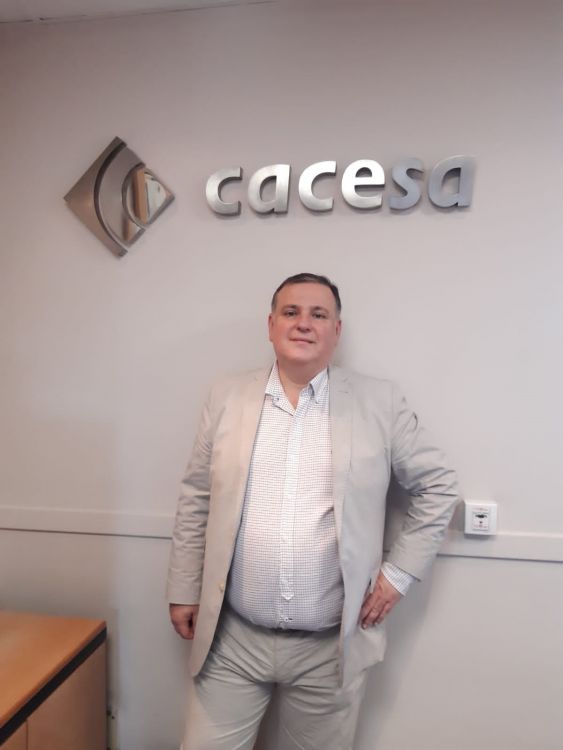 Cacesa was founded in 1987 in response to the demand for more specialized express freight services. What are the main services that Cacesa offers its customers and how has this offer evolved?

Cacesa began its activities as a response to the needs of the Spanish market in the 80s for a modern air cargo operation, capable of meeting the logistical challenges of a country that had recently joined the European Economic Community. Of course, the challenges now are very different from those of 33 years ago, and Cacesa has been adapting its portfolio of services to the needs of our customers throughout these 3 decades, but always with the focus between Asia, Europe and Latin America.

Cacesa was the first company to start air traffic between China and Latin America through its Madrid hub, back in 2009. Since then, Cacesa has transported hundreds of thousands of tons, bringing three continents closer together. With the rise of e-commerce, how has Cacesa adapted its service offer to the continuous evolution of the sector?

In 2009 we were the first to transport cargo between Asia and Latin America through our Madrid hub, thanks to the support of Iberia, our parent company. We realized then the export potential of China, so we set ourselves the goal of offering solutions to the supply chain of this great country. After air cargo, we started with the courier services and in 2015, we started the postal services from Hong Kong to Brazil, through Madrid, in 2016, we began the massive imports of e-commerce destination Spain and in 2019, the e-commerce traffic to other countries of the European Union.

Cacesa is today one of the leading international parcel delivery companies. What are the next steps that Cacesa plans to take to consolidate this position and continue to grow?

Cacesa specializes in a few tiers of the supply chain, namely airport handling, customs management and last mile services. Today, the secret lies in the in-house technology that we have developed, and we count on a staff, formed by the best professionals. We want to take advantage of important events such as the new European Directive on VAT obligations for e-commerce and the Brexit to continue expanding our services to other countries in the European Union. Specifically, between 2020 and 2021 we will extend our operations to Poland, Germany, France, Italy and the United Kingdom.

In 2019, Cacesa began its international expansion and chose Liege to open its first logistics hub outside Spain. Why Belgium? Could you explain what role this location plays within Cacesa’s structure? What is your expansion strategy in that country?

Already in 2014, we were planning to open our first international delegation at Liège Airport, but not all the elements were aligned to do so. Nevertheless, in 2019, we saw how Liège was consolidating its position as the main e-commerce import center in the European Union, and our main Chinese clients needed airport and customs solutions there. That’s why this time we decided to open. We

opened the office in August of that year.

Thanks to our office in Liège we have achieved a major contract with a well-known e-commerce platform, which needs customs services between the United Kingdom and the European Union since January 1st. This contract has allowed us to open a second office in Belgium, specifically in the city of Mouscron, on the border with France.

During the Covid-19 crisis, many international communications have been interrupted. What has been Cacesa ‘s work during this situation?

The pandemic has served to speed up many processes, including teleworking or e-commerce. After a few weeks of uncertainty, in which almost all international passenger flights were interrupted, we quickly adapted our service offer, allowing our clients to import massively through the airports of Liège, Zaragoza and Barcelona. But we also opened up e-commerce traffic by sea through the ports of Valencia and Barcelona, or opened up e-commerce import operations by rail, through the Malaszewicze border crossing in Poland.

We made a great effort between the months of March and June so that our customers’ supply chains would not stop. Our customers thanked us by increasing their package flow via Cacesa. In fact, we are breaking the record for the number of packages handled every month since April. The forecast is to end the year with more than 70 million packages handled.

Cacesa has been named Company of the Year 2020 by the Chamber. What does this award mean for the company?

The award fills us with pride and gratitude to a country that welcomed us as one of its own from day one. The authorities, the airport community, suppliers, collaborators… all have helped us a lot. We want to continue advancing in new investments in Belgium, it is a country that makes it very easy to do business.

On January 31st 2022, from 9:00 to 17:30, the Official Spanish Chamber of Commerce in Belgium and Luxembourg will organise a second edition of the professional ham cutting workshop, in collaboration with

On January 31st 2022, from 9:00 to 17:30, the Official Spanish Chamber of Commerce in Belgium and Luxembourg will organise a second edition of the professional ham cutting workshop, in collaboration with The Cortador Academy, first school in BeNeLux to learn how to cut ham professionally. The course will be carried out by the Maestro Cortador José Cristóbal Álvarez García, who obtained his renowned diploma in the well-known Spanish school “Escuela Internacional de Cortadores de Jamón”.

The course is aimed at professionals in the HORECA sector who wish to deepen their interest in the art of cutting ham legs. During the workshop, attendees will be able to study the different existing types of ham and their characteristics, as well as the regulations concerning this sector. Additionally, they will learn, in a theoretical and practical way, the main techniques to professionally cut ham, from the skin to the bone.

The workshop will  be conducted in English, Dutch and French, and will take place in Excellis – Rue Colonel Bourg, 105A – 1140 Bruxelles.

To register in this workshop, please fill in the following reply form.

Official Spanish Chamber of Commerce in Belgium and Luxembourg info@e-camara.com

Virtual breakfast-debate with MEP César Luena López: Priorities of the Committee...
This site uses cookies to provide you with a more responsive and personalized service. By using this site you agree to our use of cookies. Please read our cookie notice for more information on the cookies we use and how to delete or block them.Accept Read More
Scroll to top