Last 28th June, the Official Spanish Chamber of Commerce in Belgium and Luxembourg organised an afterwork among members in collaboration with the Eurostars Montgomery Hotel. These events are an initiative of the Chamber that seeks to promote networking and the generation of opportunities among its members.

The event was attended  by closed to 50 participants, including members of different Chamber member companies and Spanish and European public bodies.

Attendees were able to enjoy an aperitif in a relaxed and ideal atmosphere to interact and generate business opportunities.

This new edition of the already well-known afterworks organised by the Chamber once again demonstrated the success of this type of initiative and reaffirmed the organisation’s will to continue offering members a suitable space where they can strengthen ties between different professionals.

On 18 May, the Board of Directors of the Chamber held a hybrid meeting at the offices of the Economic and Commercial Counseling of the Embassy of Spain.

During the meeting, the draft of the new statutes of the Chamber was presented, a review of the actions developed by the Delegation of Luxembourg was made and a balance of the last activities carried out was made.

Likewise, the Board of Directors approved the annual accounts for the financial year 20201 for their presentation at the Ordinary General Assembly which will take place next 20th June.

The 28th edition of the Erasmus for Young Entrepreneurs Network Meeting took place at the Thon Bristol Stephanie Hotel in Brussels on 11 and 12 May, which was once again held in person after years of pandemic.
The event brought together all the entities involved in the EYE Programme (Erasmus for Young Entrepreneurs), funded by the EU and for which the Chamber is the Intermediary Organisation for Belgium and Luxembourg.
The various workshops, meetings and symposia served to strengthen the links between the different participating organisations, with the aim of increasing the quantity and quality of exchanges between entrepreneurs from different European countries.
This year’s event featured a session focused on the inspirational practices of the EYE programme to support Ukrainian entrepreneurs in the wake of the Russian invasion.
All those who manage a small or medium-sized business in Belgium can participate in the programme, as it is free of charge and involves the support of a young entrepreneurin the day-to-day running of the business, providing innovative ideas and expanding the network of contacts in other countries.
Both young entrepreneurs and potential host entrepreneurs can find more information on the following link.

On May 5, in collaboration with the Spanish firm B Law & Tax, the Official Spanish Chamber of Commerce in Belgium and Luxembourg organized a conference at the Meliá Hotel in Luxembourg, which was attended by numerous experts from the financial, tax and real estate sector in Luxembourg to listen to this lecture on “Financial investment and wealth management”.

Marta González, the secretary general of the Chamber, introduced the speakers, Inmaculada Pineda, partner, and Elsa Ochoa, tax advisor, both at B Law & Tax, and introduced the topic.

The speakers then took the floor and explained how to deal with the taxation of financial and real estate investment, as well as the savings opportunities provided by different investment vehicles under Spanish law. 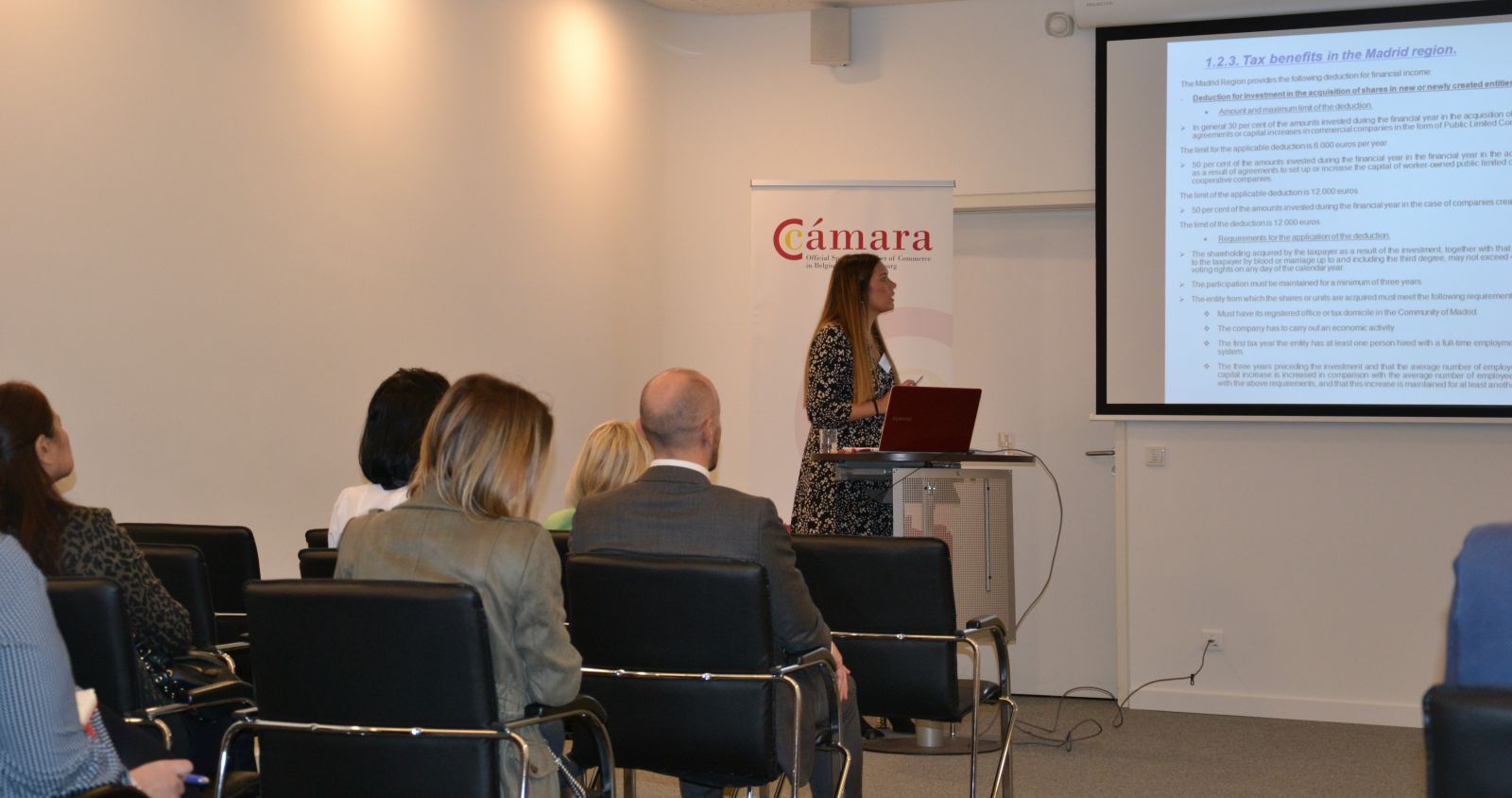 Anyone who is interested in the conference and could not attend can contact the Chamber so that we can provide you with a copy of the presentation, as well as put you in contact with the speakers if you wish.

Yesterday, Wednesday 4th May, the Official Spanish Chamber of Commerce in Belgium and Luxembourg held in Brussels a new luncheon debate with the presence of Charlina Vitcheva, Director General for Maritime Affairs and Fisheries of the European Commission (DG MARE). The theme of the event revolved around the Commission’s policies in relation to its directorate and the future of fisheries.

The event was attended by a variety of people, including business executives, delegates from the Autonomous Communities, representatives of Spanish and European organisations and various 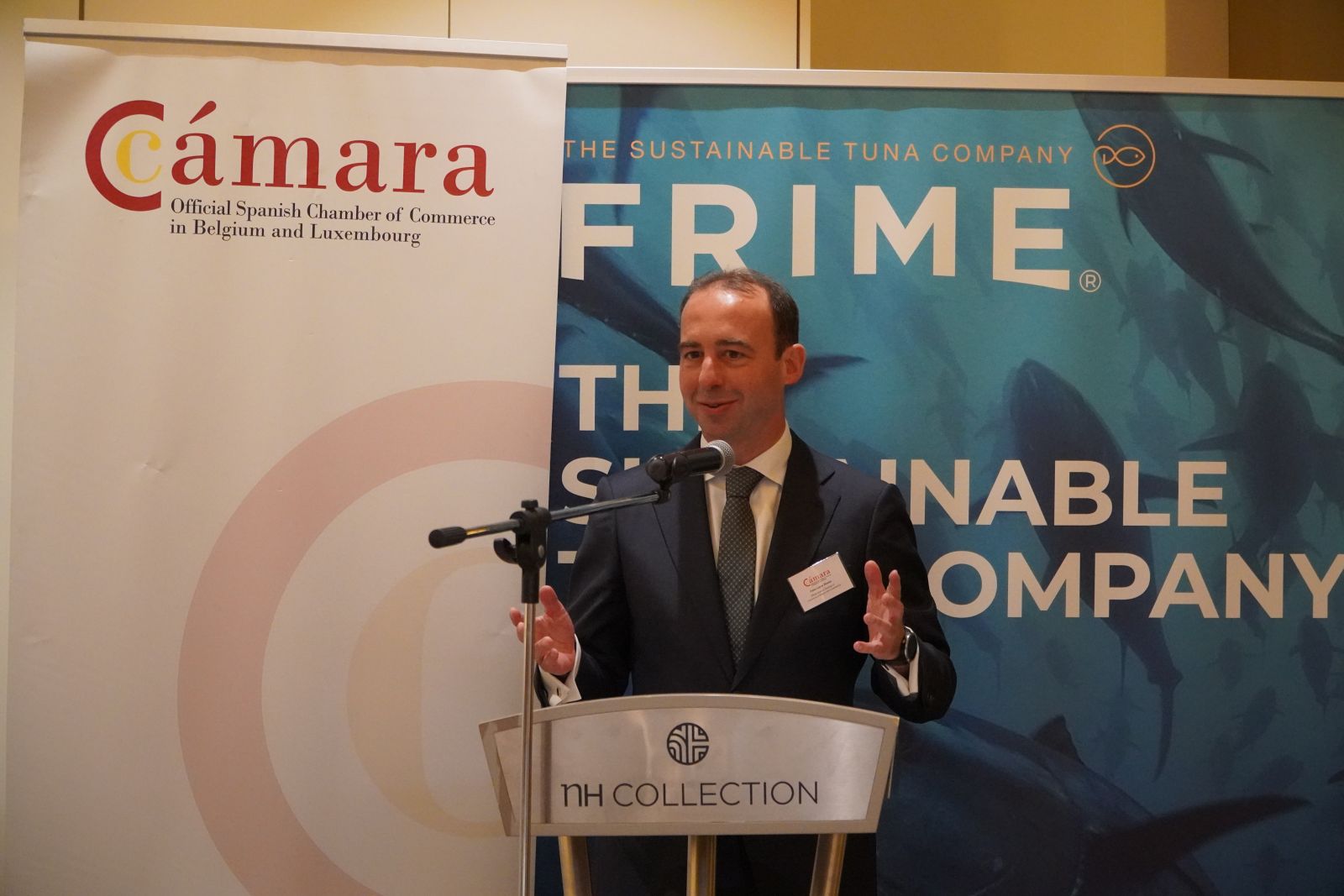 partners of the Chamber.

The conference was opened by the President of the Chamber, Pablo López-Álvarez, who took the opportunity to thank all those present for their attendance. He then dedicated some words of special recognition to the extensive career of the speaker Vitcheva both in the European institutions, in which she has held various positions of responsibility over the years, as well as her contribution to the Bulgarian national politics always from the support to the European construction. López-Álvarez also took the opportunity to highlight the vital importance that the policies related to the maritime industry have had in Spanish companies over the years and the relevant contributions of former Commissioners and Directors General. 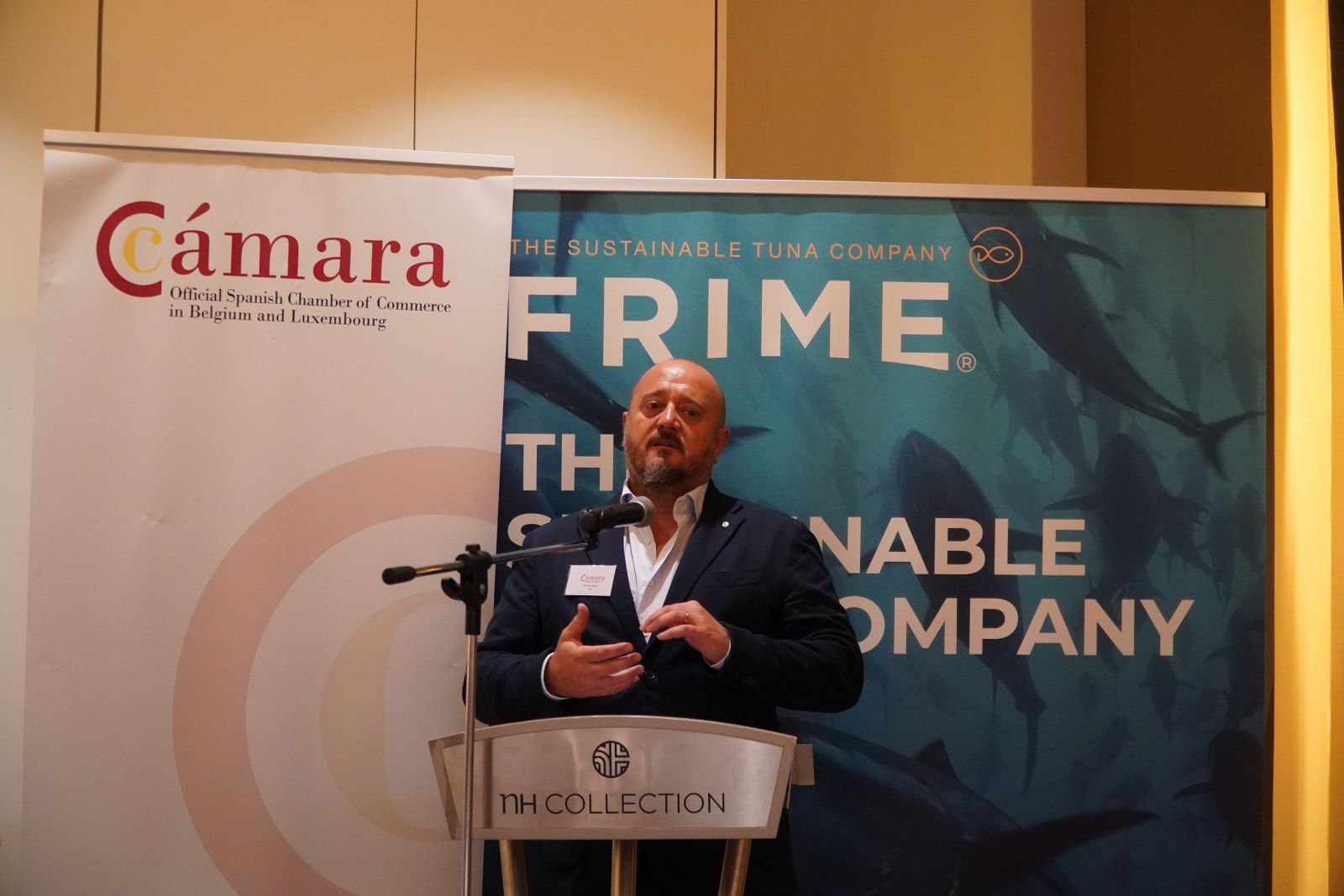 The President of the Chamber also introduced Salvador Ramón Mateo, President of FRIME, the company that sponsored the event. FRIME – “The Sustainable Tuna Company” is a company with a family tradition, leader in the commercialisation of sustainable tuna with more than 40 years of history. Salvador Ramón highlighted different achievements of the company during his speech and told us about the future plans of the company and its continued commitment to R & D in the optimization of all its processes, after which he gave the floor to the speaker.

Vitcheva dedicated her speech to explaining the current and future situation of the fishing sector, referring to the different policies and strategies promoted by her department. Vitcheva also took the opportunity to highlight the importance of the existence of companies such as FRIME, which through innovation are ultimately responsible for advancing in the construction of a more sustainable industry that ensures fishing in the future.

In this context, Vitcheva detailed the proposals made by the Commission in the area of maritime affairs and fisheries, the different aid packages that have been designed to support 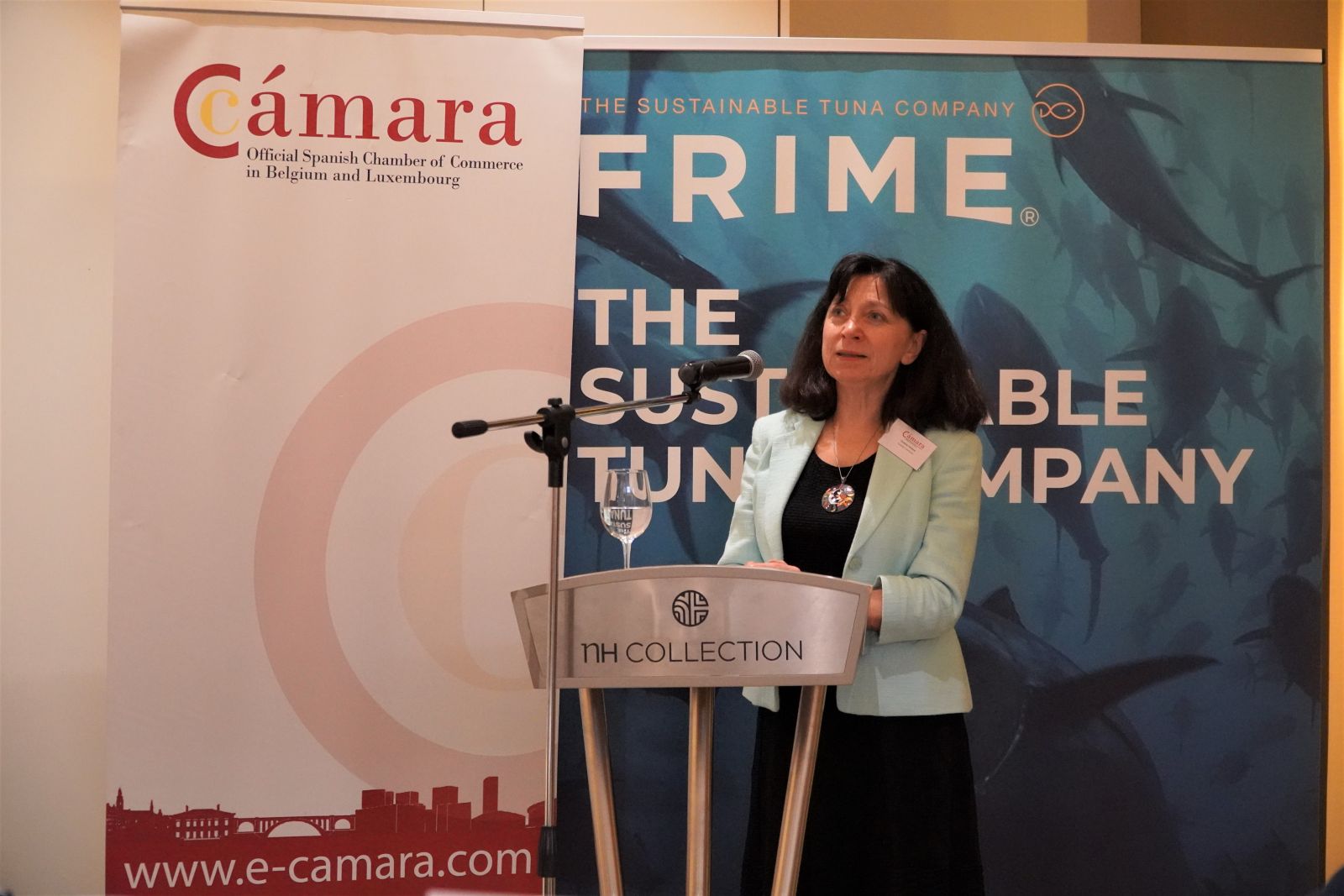 the most vulnerable sectors of the industry in this crisis situation caused by Covid-19 and the war in Ukraine. According to Vitcheva, the rise in fuel prices, which has had a major impact on maritime workers, once again demonstrated the urgent need for the fishing sector to move towards a decarbonised industry that is gaining energy autonomy to ensure its future activity.

Vitcheva was also optimistic about the challenges that her directorate must face and affirmed that DG Mare works from the concrete, being aware of the Union’s resources and opportunities in the global maritime context, especially characterised by its interconnection between nations, in order to design a concrete roadmap that will allow us to continue advancing in key pillars such as respect for the environment and marine ecosystems.

After the presentation, a question-and-answer session was opened, where participants were able to express their opinions and raise different questions about what had been presented, as well as creating an unbeatable environment for dialogue and debate.

The Chamber would like to give special thanks to Bodegas Altos de Torona and Bodegas Regina Viarum, whose wines were tasted by all the attendees, as well as to the participants, who made this event a very successful lunch-debate.

On 27-28 April, the European MobiliseSME consortium met for the first time in person after almost two years of working together virtually.

MobiliseSME is a programme funded by the European Commission and coordinated by the Chamber that aims to strengthen the competitiveness of European SMEs and develop the skills of their staff through the temporary mobility of their managers, owners and employees to establish partnerships with other companies abroad.

Through the MobiliseSME programme, shipping and hosting companies have the opportunity to access new markets or consolidate their business in Europe, develop new products or services, conduct joint research or projects and share their networks.

In addition, the mobility can acquire and transfer first-hand knowledge of a subject area or other organisational methods, while developing intercultural and linguistic skills in a business environment.

In parallel, the meeting served to achieve synergies between the project partners, create links and generate an atmosphere of trust that will strengthen the collaboration of the partners.

MobiliseSME partners, or local contact points, offer practical and financial support to companies in finding European partners to collaborate with through the secondment of their staff. 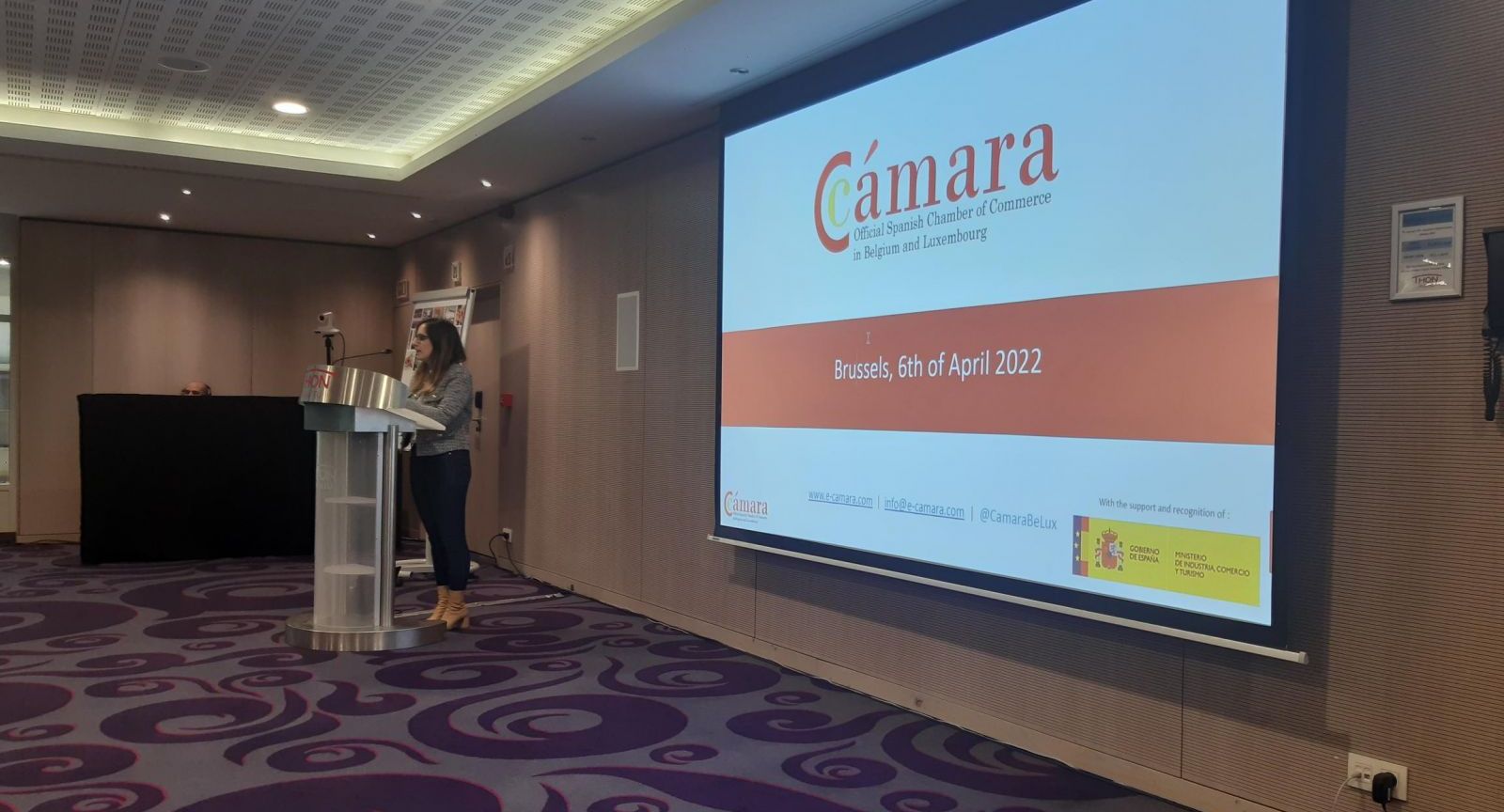 Last Wednesday, April 6th, the Official Spanish Chamber of Commerce in Belgium and Luxembourg participated as a speaker in a conference aimed to IE University students at the Thon UE Hotel in Brussels.

Sara Sánchez, business development manager of the Chamber, and Julián Szkatulak, from the commercial department of the company, explained the services offered to Spanish, Luxembourgish and Belgian companies, the organised events, the assistance to entrepreneurs as well as the European programs coordinated from the Chamber. During the presentation, they also chatted with the university students to know their interest and knowledge about exports and imports between Belgium and Spain.

The presentation took place in English and was attended by around 60 IE University students from more than 10 different countries in and outside Europe.

From the Chamber we would like to thank IE University for having counted on our institution for the presentation and the attendees for the interest shown in the presentation.

On the 7th and 8th of April took place in Brussels the kick-off meeting of Softimprove, an Erasmus+ project coordinated by the Official Spanish Chamber of Commerce in Belgium and Luxembourg.

The project partners, coming from Estonia, Iceland, France, Germany, Spain and Belgium gathered at the Chamber’s premises with the aim of initiating the project activities and establishing the future actions for its proper implementation.

Softimprove is a 36-month project and the main motivation behind the project is the conviction that soft skills are the key to unlock potential in young professionals and entrepreneurs. In the context of the rise of artificial intelligence, soft skills have proven to be a crucial asset in terms of employability and entrepreneurial success.

In addition, the meeting served to create synergies between the project partners and to identify the persons responsible for each organisation. The fact that the meeting was held in a face-to-face format also made it possible to create links and generate an atmosphere of trust that will allow the collaboration of the partners to be strengthened.

Via the different activities, the partners aim to: