Last Thursday 22nd of April, the Cultural and Scientific Department of the Spanish Embassy in Belgium and the Official Spanish Chamber of Commerce in Belgium and Luxembourg, in collaboration with the Spanish Embassy in Luxembourg, the Center for Industrial Technological Development (CDTI), the Spanish Office for Science and Technology (SOST-CDTI) and the Superior Council for Scientific Research’ (CSIC) Delegation to the European Union, organized the webinar “Response to COVID-19: solutions’ examples in Belgium, Luxembourg and Spain”. It consisted in a digital, special edition of the “Los Mediodias de la Embajada” and the fourth edition of the cycle Spain Means Innovation, a Chamber’ initiative to boost Spanish companies’ commercial and business interests at a local level in Belgium and Luxembourg.

During the webinar, different good practice examples were shown on the development of innovative technologies and solutions which are being carried out in order to fight against the COVID-19 pandemic in Spain, Belgium and Luxembourg, and both synergies and connections that can be established between the three countries were highlighted. 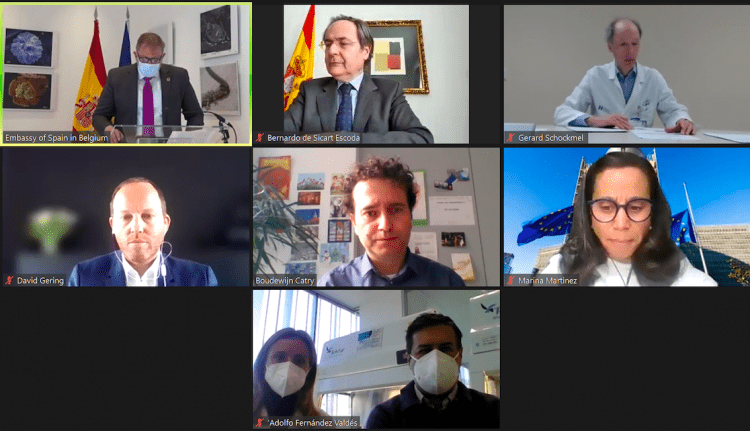 The webinar was inaugurated with welcoming words from H.E Ms. Beatriz Larrotcha Palma, Ambassador of Spain to the Kingdom of Belgium, who highlighted the importance of collaboration between countries in order to fight the pandemic, as well as thanking speakers and assistants for their presence. Boudewijn Catry, researcher at the Belgian public health and epidemiological center Sciensano spoke after her, and explained the Covid-19 epidemiological information’ management system launched by Belgium which has been identified by the European Center for Disease Control (ECDC) as one of the leading for epidemiological monitoring in Europe.

Following him, Marina Martinez, H2020 Programme Officer at the CDTI-SOST office intervened and threshed the different innovation programs recently launched by the EU to fight the pandemic, as well as highlighting the important Spanish participation in the Horizon 2020 program in fields such as nanotechnology. After this, S.E. Sr. Bernardo de Sicart Escoda, Spanish Ambassador in the Great Duchy of Luxembourg, spoke and presented the important work of Spanish institutions and associations in Luxembourg to generate synergies between the two countries in all fields, including health.

After the firsts interventions the board of experts started, moderated by Sergi Farré, Cultural and Scientific Advisor of the Spanish Embassy in Belgium. Dr. Gérard Schockmel, specialist physician in infectious diseases at the Robert Schuman Luxembourg Hospital began by detailing the pandemic management in Luxembourg and current trends.

On the other hand, Adolfo Fernández, director, and Belén Cabal, main researcher, both of the center fo 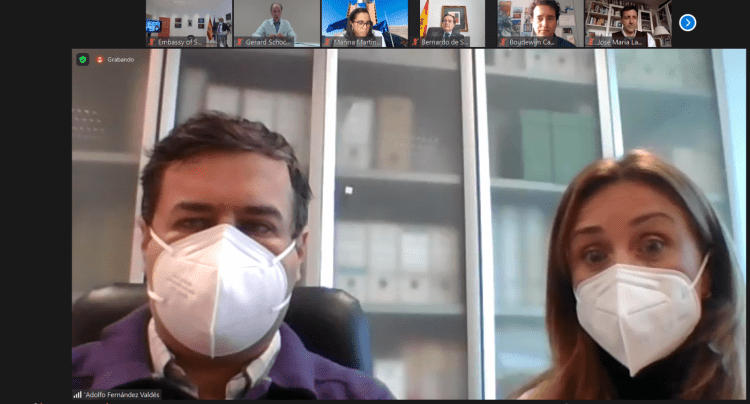 r nanomaterials and nanotechnology research CINN-CSIC-UO-PA, presented the innovative materials recently developed and its potential applications against Covid. José Maria Lagarón, of the IATA-CSIC research center, presented the development of a mask based on own nanotechnology as an example of rapid development of solutions against Covid given the scarcity of masks in the initial stages of the pandemic. Last, David Gering, Director of Communications at the Belgian pharmaceutical industry association (Pharma.be) explained the enormous importance of Belgium in the industry’s European network as well as of its impact on the Belgian economy.

During the question time, assistants to the event had the chance to express their doubts and comments to the speakers, such as the measures launched in Luxembourg, vaccination strategies or crisis management.

From the Official Spanish Commerce Chamber in Belgium and Luxembourg we would like to warmly thank all speakers for their excellent presentation, as well as to all participants for their presence.

Last 4th June 219, the Official Spanish Chamber of Commerce in Belgium and Luxembourg , in collaboration with the Embassy of Spain in the Kingdom of Belgium, organized the conference “Spanish Science Diplomacy. Ingelia, the success of a Spanish business model in Belgium based on HTC technology” within the Spain Means Innovation program.

During the conference, Marisa Hernández Latorre, founder of Ingelia and nominated last year for the EU Prize for Women Innovators, presented the technology developed by her company for 12 years, which has the aim of transforming waste into raw materials. Hernández highlighted the importance of HTC technology to support the local circular economy, not just because waste becomes raw materials that could be used for other industries, but because CO2 emission from transport could be reduce by installing transformations plants near the cities. 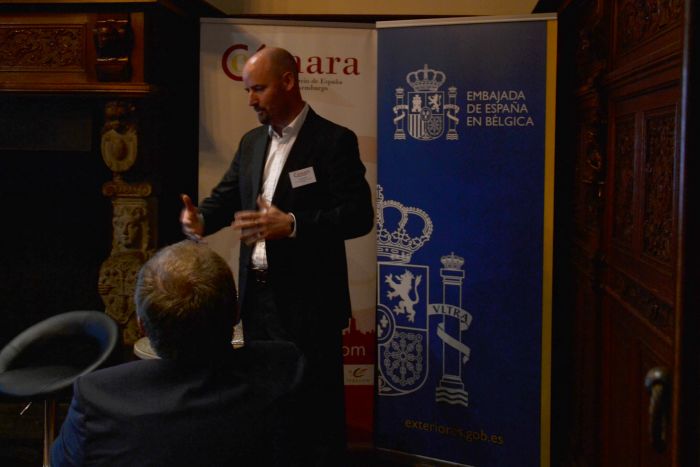 Moreover, the representative of Renasci, Luc Descender, partner of Ingelia in Ostende, standed out the difficulties that innovative technologies have to face, both administrative and funding, as well as the ones in product exportation.

The speakers remarked the relevance of this Spain means innovation’s kind of conferences in order to interact with other innovative companies and technologies, due to the fact that it was in a scientific forum where both companies met and started to collaborate together.

Lastly, Andrés Martínez, representative of the CDTI, highlighted the funding opportunities offered by his institution to innovative companies such as Ingelia, with which they have collaborated in its launch and growth.

The Spain Means Innovation program is an initiative run by Official Spanish Chamber of Commerce in Belgium and Luxembourg, through which the Chamber seeks to act as an independent platform to enhance the commercial and business interests of Spanish companies at local level in Belgium and Luxembourg. The objective of the program is to provide Spanish companies with access to the market and relevant actors in BeLux for the development of their activity, implementing commercial intelligence and developing with them influence and trusted networks at all levels.

Middle term objectives of the program:

The Chamber will elaborate annually with the participating Spanish companies, a strategic and communication plan oriented to accomplish the objectives.

For the year 2019, the following priority sectors have been selected:

The Spanish companies that are members of the Chamber in the categories of Sponsor and Benefactor can participate in the program, in all the actions and activities foreseen.

The Chamber has the collaboration of the Economic and Commercial Office of Spain in Belgium and Luxembourg for the development of the program.