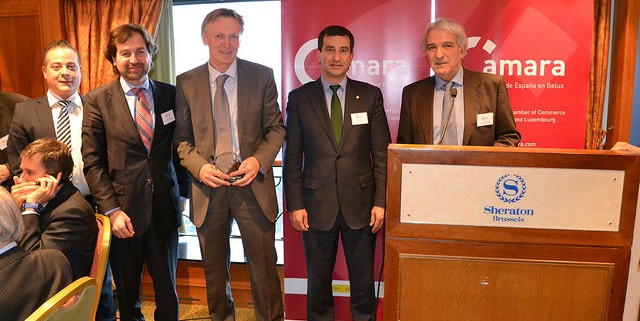 “Green growth and the role of the company” was the title of the paper that the European Commissioner of Environment, Dr. Janez Potočnik presented today at a luncheon – debate organized by the Official Spanish Chamber of Commerce in Belgium and Luxembourg.

The event was attended by numerous personalities from the diplomatic world as well as officials and businessmen from various sectors. Following a presentation of the life and work of the Commissioner by the President of the Chamber, Juan Rodríguez-Villa, Janez Potočnik began spelling out the pillars of his environmental policies. He has made clear the globality and interconnection of the problems we are currently facing, and highlighted the two most crucial variables when measuring the environmental impact: the unstoppable global population growth and the rising per capita consumption of the world population.

The Commissioner stressed that the current growth model is not valid for future generations, especially when aspiring to the same quality of life. To solve this equation, he supports commitment to a more efficient use of natural resources, cohesion between the different long-term oriented policies and the transformation of the industrial sector towards a less intensive raw materials use.

The Commissioner believes it to be necessary to discard the idea of ​​incompatibility between economy and environment, and advocates for striking a union of forces between environmental policies and businesses that result in social welfare.

In the round of questions, attendees have tackled issues related to concrete measures proposed by the cabinet. In conclusion, the Commissioner thanked the Chamber’s invitation to the luncheon-debate.

Then, Juan Rodríguez-Villa Matons, President of the Official Spanish Chamber of Commerce in Belgium and Luxembourg, thanked the Commissioner Potočnik and his team for their participation in the event, as well as using the House as a platform to announce the priorities of the Directorate General, making evident the growing importance and prestige of the House in Europe.

ONCE and its Foundation promote in Brussels the “social brand” of Spain
Scroll to top
This site uses cookies to provide you with a more responsive and personalized service. By using this site you agree to our use of cookies. Please read our cookie notice for more information on the cookies we use and how to delete or block them.Accept Read More
Privacy & Cookies Policy