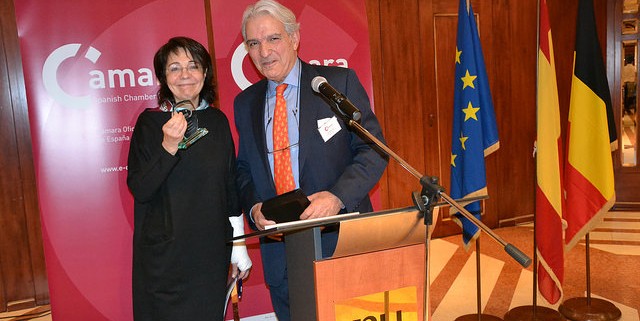 European Commissioner for Maritime Affairs and Fisheries Maria Damanaki exposed her proposal “Blue Growth” at the luncheon-debate organized by the Official Spanish Chamber of Commerce in Belgium and Luxembourg. She delivered a keynote speech discussing relevant issues to the EU Blue Growth strategy and ways to boost sustainable growth in the European marine and maritime economy.

The event has hosted many personalities including ambassadors from different coastal countries, members of companies related to the sector and representatives of some environmental organizations. The President of the Chamber, Juan Rodriguez-Villa, gave a brief presentation of Commissioner mentioning her long background in politics. After this introduction, Damanaki has thanked for the opportunity to talk informally on her proposal “Blue Growth” presented to the European Union in 2012.

Her main interest in starting this project is the real possibility of creating thousands of jobs and over 100,000 million euros in added value in Europe. In this way, the effects of the crisis in many member countries could be mitigated.

The project, in which European structural funds planned for seven years will be invested, is based on five main pillars: renewable marine energy, blue biotechnology, aquaculture, coastal tourism and sustainable fishing. In all of them, Spain plays a key role. The Commissioner mentioned several concrete examples of Spanish companies and projects that are currently at the forefront in these areas.

She also proposes streamlining the maritime space to enable the coexistence of these activities, for which it is necessary to improve the mapping of the seabed and the creation of an Atlantic Strategy that also includes countries from across the ocean. At the moment, the EU is working on the creation of an Atlantic Forum that it will be the preliminary phase to this strategy.

After her speech, the attendees had the opportunity to express their opinions. They have shown their concern about the current methods of fishing, the over-exploitation of stocks or the high number of authorities with jurisdiction in maritime matters and their poor interconnection capacity. To deal with this situation, Mrs Damanaki trusts in the success of her project and she is also optimistic about the economic crisis. “I am sure that the European institutions, Member States, regions and companies can work together to benefit from the potential of the sustainable growth that supposes the European blue economy.”

Change at the Secretary of State for Trade