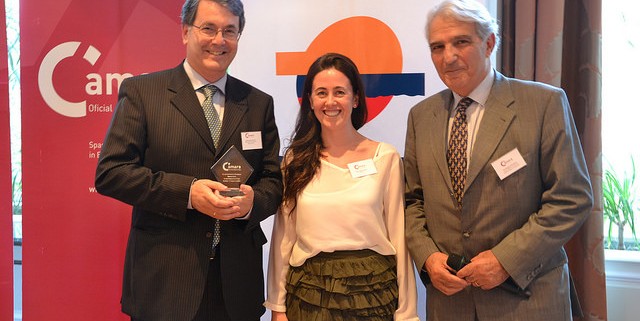 The Chamber organized on the 14th of June a luncheon-debate about the “Arab Spring and the course of events in the Middle East and North Africa”, during which Nicolas Pascual de la Parte, Ambassador Representative to the Political and Security Committee, acted as speaker.

Nicolás Pascual de la Parte, Ambassador Representative to the Political and Security Committee made a presentation on the development of the relations between the European Union and the southern Mediterranean areas, the reasons behind the revolutions, the reaction of the international community, and what we can expect from these changes.

The Representative Ambassador gave a brief historical review, as an introduction, about the systems of Arab countries after their independence, analyzing their political systems and the adaptations they have made.

He has also stressed the effort made by the European Union to maintain good relations with the Middle East and North Africa (MENA its acronym in English) to maintain the peace in the Mediterranean, highlighting the importance of the structural agreements and safety arrangements.

With regard to the so-called “Arab Spring” he has spoken about its origins and its evolution, highlighting the consequences of it in Syria and Libya. The riots were, as indicated, unexpected even for the experts, as has happened earlier with other historical events. The movement continues and does not have a clear drift, having spread to other southern Mediterranean countries, while others have made major reforms to prevent it.

The Representative Ambassador explained the new strategy launched by the European Union, based on values ​​and principles. This new strategy uses a system called “more for more”, that is, with a greater commitment, dialogue and integration of the countries, greater will be the support provided to the EU with funds and grants.

The Representative Ambassador explained the new instruments of the European Union to coordinate these strategies, called “task forces”, through which they will coordinate with the partners the support to democracy in the Middle East and North Africa. It also attempts to provide a springboard for private companies to participate in this collective support. Then Ambassador explained the functioning of the MENA countries economies and explained how the riots have affected economically to the MENA region and the European Union.

Juan Rodríguez-Villa Matons, President of the Official Spanish Chamber of Commerce in Belgium and Luxembourg, thanked the Ambassador Representative and his team for their participation in the event, as well as using the Chamber as a platform to expose the lines of action of Spain and the European Union in an important geographic area at economic, security and social level. Finally, he supported, recognized and appreciated the effort of the Spanish institutions to help the Mediterranean area to reach the ​​peace and the prosperity.

Finally, the Vice-president made a commitment to innovation as one of the pillars where Europe should be based on to recover and ensure a sustainable future growth.

Change at the Secretary of State for Trade
Scroll to top
This site uses cookies to provide you with a more responsive and personalized service. By using this site you agree to our use of cookies. Please read our cookie notice for more information on the cookies we use and how to delete or block them.Accept Read More
Privacy & Cookies Policy