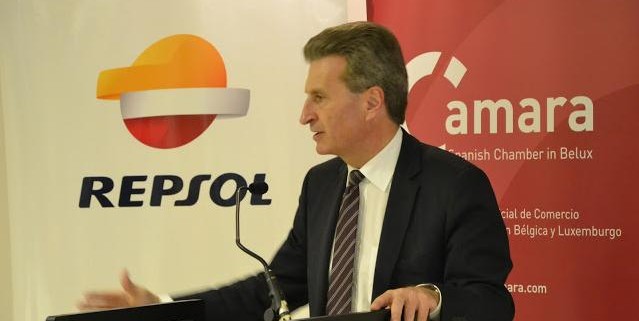 On 19 April, the Energy Commissioner  Günther Oettinger gave an interesting presentation in the context of the lunch-debate of the Official Spanish Chamber of Commerce in Belgium and Luxembourg for about one hundred assistants, about energy and competitiveness in Europe, sponsored by the Spanish energy company REPSOL.

After a welcome cocktail the Chairman of the Chamber, Sr. Rodríguez-Villa, took the floor to present to the Commissioner.  He highlighted the importance of his politics for the economic activity, sustained growth and the control of climate change.

Then, the Commissioner started his presentation by referring to the strong industrial tradition existing in Spain especially in sectors such as the textile industry, the food industry, the automotive industry, tourism, energy and telecommunications. He mentioned that, in spite of the ravages of the crisis, the Spanish industry has to continue aiming at the recovery of its leading position which Spain has only been enjoying for some years on the global market.

The Commissioner sincerely believes in the need of reindustrializing the country, retaining and developing the existing industry as well as attract new investments and he considers that all of this is closely related to the energy policy. Certain industries, especially intensive industries for the use of electric energy, only support investing in a country with positive stable perspectives of prices and power supplies. This is why it is essential that the goals of energy as well as its long-term maintenance are clear.

Investment in energy is long-term investment

Mr. Oettinger invited Spain to make the best use of its pertinence to the Union and the energy policies distinguished here. He also highlighted the necessity of completing the internal energy market and the opportunities this entails: for example the development of renewable energy or a future creation of a gas corridor that connects Africa, Spain and France.

Similarly, he also spoke in favor of the planned grants for alternative energy, always and when they gradually withdraw as technologies reach maturity. In this regard he also supports the non-intervention of the state, except in very specific cases, energy prices, in such a way that they reflect the reality of the energy markets without distortions which harm the free market and the consumers that benefit from some operators.

With regard to the questions raised by the assistants about the role of fossil resources such as hydrocarbons and natural gas, he supports the idea that the energy mix should be kept in mind since it is essential nowadays for the economic development.

Commissioner Oettinger has announced that the Green Paper 2030, a roadmap for climate and energy policies for 2030, which is not only limited to some more ambitious objectives for the reduction of  Co2 but it also supports greater cohesion of the European energy policy and the consolidation of an internal market, is published already.

Support for the Europeanisation of the energy policies:

To end the meeting, Arturo Gonzalo Aizpiri, corporate director of Institutional Relations and Corporate Responsibility of Repsol, took the floor to express his appreciation of all of the assistants and he agreed with the Commissioner regarding the necessity of more Europe and more Industry to reach a greater competitiveness and to attract investment in Spain. After a resounding applause of the assistants, he delivered a thank you plaque to Commissioner Oettinger in the name of the Chamber.

Finally, the Chairman of the Chamber, Sr. Rodríguez-Villa expressed his gratitude towards the Commissioner and his cabinet for having chosen the Official Spanish Chamber of Commerce in Belgium and Luxembourg as a platform to disseminate the initiatives of the General Management of Energy

Arturo Avello Diez del Corral in ‘Investment Opportunities in Spain: the...
Scroll to top
This site uses cookies to provide you with a more responsive and personalized service. By using this site you agree to our use of cookies. Please read our cookie notice for more information on the cookies we use and how to delete or block them.Accept Read More
Privacy & Cookies Policy