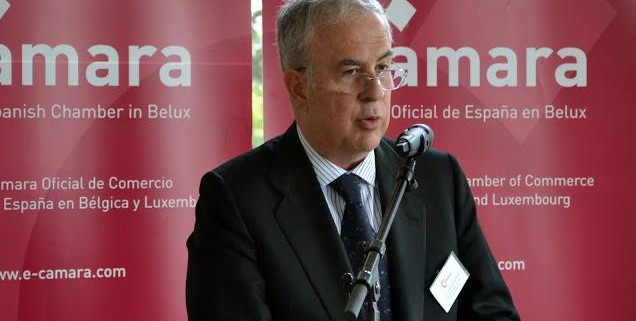 On 7 May The Chamber of Commerce in Belgium and Luxembourg organized its first event in Luxembourg, a luncheon-debate that had as a rapporteur the Ambassador of Spain in the Grand Duchy, Mr. Arturo Avello Diez del Corral.

The debate, of which the theme was ‘Investment Opportunities in Spain: the real estate sector’, was held at the Hotel Meliá Luxembourg and also included the collaboration of Don Fernando Ramirez de Haro Aguirre, from real estate consultant Aguirre and Newman, who gave an interesting presentation about the different investment opportunities in real estate in Spain.

The event started at twelve o’clock, where the attendees were greeted with a welcome cocktail before moving on to the living room, where Mr. Sergio de Miguel-Jessel, vice president of the Chamber of Commerce, introduced the Ambassador.

After that, Mr. Arturo Avello Diez del Corral expressed his gratitude and appreciation for having been invited to the event and for having the opportunity to share with everyone a positive light on the economic opportunities of Spain, even in this time of crisis.

He stressed that Spain is an attractive country for Foreign Direct Investment, a situation that remains and is expected to continue increasing in the future. The reasons for this phenomenon, as he explained, are the existence of a stable government that has not hesitated to adopt reforms to boost economic growth in the medium term.

Above all, he highlighted the Labor reform, as well as the Pensions and Retirement Age reform, Public Administrations, Digital and Energy reform and finally the Access to Credit for SME.

Spain’s competitiveness rests, according to the Ambassador, on several pillars: A workforce between 20 and 40 percent cheaper than in the rest of Europe; the presence of Spanish multinationals all over the world in different sectors and the low indebtedness of the corporate sector.

Mr. Avello stressed that the indicators foresee an economic growth in Spain later this year thanks to an increase in exports, a reduction of the budget deficit and the risk premium, which will lead to a reduction in financial costs. He also hopes that this economic growth will help to see a drop in the unemployment rate.

The Ambassador noted that investment in immovable property in Spain is having a good time after a considerable drop in prices and a reform of the law of costs, which insures homeowners against the expropriations that the previews law provided.

The event ended with a thanks from Sr. Sergio de Miguel-Jessel, followed by the presentation of a commemorative gift of the Chamber Ambassador of Luxembourg.

Company of the Year Award Air Europas and cellebration of the 75th Annivers...
Scroll to top
This site uses cookies to provide you with a more responsive and personalized service. By using this site you agree to our use of cookies. Please read our cookie notice for more information on the cookies we use and how to delete or block them.Accept Read More
Privacy & Cookies Policy