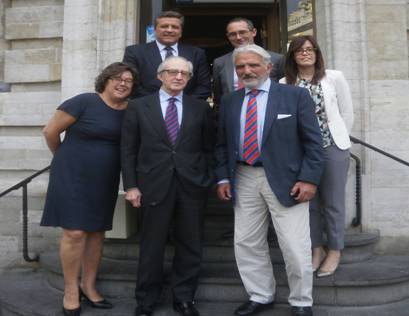 The Board of Directors of the Chamber wants to thank the collaboration of the Economic and Trade Counselor, Fernando Gómez Avilés-Casco, who, for the last 4 years, has accompanied us as the Honorary (institutional) Vice-president.

Before his establishment in Brussels, Fernando Gómez Avilés-Casco was General Director and Vice-president of the Spanish High Council of Chambers of Commerce. His integration in the Board of Directors of the Official Spanish Chamber of Commerce in Belgium and Luxembourg involved the contribution of his exceptional experience in the world of chambers.

This experience, combined with his serious and friendly character, allowed to define the aims of the Board of Directors. We highlight his decisive intervention in the integration of the Spanish Chamber of Commerce in the Grand Duchy of Luxembourg in our Chamber.

With Fernando Gómez Avilés-Casco, Spain had an economic and commercial leader in Brussels, who’s efficient and loved and who showed, next to his wisdom, his diplomatic soul.

His new destination in Spain, allows him to change routines and passions, born out of a professional life to dedicate himself completely to his priority passion: his family.

Thank you for everything, Fernando.

The Chamber presents Brussels as a business and investment destination for Catalan...
This site uses cookies to provide you with a more responsive and personalized service. By using this site you agree to our use of cookies. Please read our cookie notice for more information on the cookies we use and how to delete or block them.Accept Read More
Scroll to top